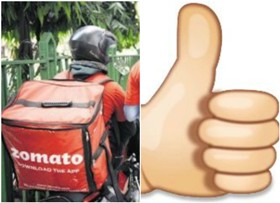 A Big Thumbs Up To Zomato

A Big Thumbs Up To Zomato

People are talking about the way a person called up Zomato and requested them to change their delivery executive because he was Muslim. People recall this had happened with Ola too in the past when a passenger requested for a change of driver as the one assigned to him was Muslim. People say such bigotry is not expected in this age and time, but the political climate of divisiveness has filled the minds of even otherwise sane Indians with hatred. People are amazed that some people even read the names of delivery executives of food delivery companies. People say that when one is hungry and orders food, the most pressing thought is to get it delivered as soon as possible. People are wondering how others can be so narrow-minded as to ask for it to be delivered by a person belonging to a particular religion.

People are also applauding the stand taken by Zomato who promptly refused to comply with the request. They are also thankful that Zomato's founder, Deepinder Goyal, tweeted to say that "food is religion". For all gastronomes, food is indeed religion. People are also surprised that others object about the religion of the delivery person but do not know that most chefs, helpers and waiters in many eateries are Muslims. People ask does it really matter who prepares the food or who delivers it as long as one gets what one orders? People understand that it might matter to a person if he or she gets a non-vegetarian dish instead of the vegetarian dish that he or she ordered, but apart from that little else should matter.

People suggest that the ones who are so finicky about who prepares or who delivers their food should either eat at home or go to the satvik, jain or pure vegetarian eateries after getting a list of all employees to check that they employ only upper-caste Hindus. After all, would such people like to eat food prepared by SCs, STs or OBCs? People say that it is really absurd that some people have such deep-seated biases.