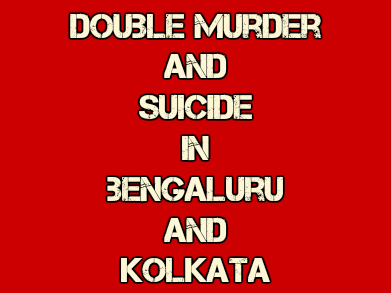 A Chartered Accountant Kills Wife, Mother-in-Law And Then Commits Suicide

A Chartered Accountant Kills Wife, Mother-in-Law And Then Commits Suicide

What drives a person to commit multiple murders, that too of people who were near and dear just a few years back? Amit Agarwal, a Kolkata-based chartered accountant is said to have murdered his wife in Bengaluru and then, after flying back to Kolkata the same day, shot his mother-in-law fatally before killing himself. This sordid and tragic saga unfolded as the couple was in the process of getting a divorce after living in separation for the last two years. It is reported that the divorce proceedings were turning acrimonious over property matters and whenever Amit went to attend hearings in Bengaluru, the couple fought for hours. The couple had a 10-year old son whom Amit brought back with him after killing his wife.

What transpired between Amit and his wife in Bengaluru that made him such a maniacal killer? Divorce proceedings are becoming increasingly normal in India and the Marwari community is also witnessing a spurt in marriages breaking irrevocably. Most of the times, the financial part of these divorces are settled amicably between the two families. Sometimes, the matter gets stuck on the question of the custody of children, but even that is normally settled, either by the families or by the courts. But, as the Agarwal case shows, settlement of joint property can become a sore point between the couples, especially when both are educated and working, and this is something that even the family elders find difficult to settle.

Yet, killing one's wife and mother-in-law in a fit of anger, though not unheard of, is rare, especially over stuck divorce proceedings. There can be other angles to the case. Maybe Amit was facing financial difficulties and wanted to sell the property under dispute. Maybe he wanted to marry again and thought his wife and in-laws were creating unnecessary hurdles. Amit's suicide has complicated matters (the police say they found a suicide note near his body), If his motive in killing his wife was to become the sole owner of the property under dispute then why did he kill the mother-in-law? And why did he commit suicide? There are many questions that remain unanswered and both the Kolkata and Bengaluru Police are investigating the matter to unravel the motive behind the crime.