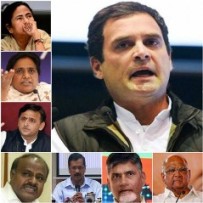 A Resurgent Congress Might Be Bad News For Opposition Unity

A Resurgent Congress Might Be Bad News For Opposition Unity

Editor-in-Chief of indiacommentary.com. Current Affairs analyst and political commentator. Writes for a number of publications. View all posts by this Author
The worst nightmare of regional parties has come true. The Congress has bounced back in style by winning in the Hindi heartland states of Rajasthan, Madhya Pradesh and Chhattisgarh. For the last few months, regional parties were pushing for building a common platform of non-BJP parties to take on Narendra Modi in 2019. But these parties were not eager to either accept Rahul Gandhi as the natural choice to lead the front or grant the Congress much space in each of their strongholds. Their calculations were based on the fact that with just 44 Lok Sabha seats in 2014 and successive losses thereafter, the Congress was neither in the position to dictate terms nor lead the united front. Each regional satrap  most prominently TMC chief Mamata Banerjee  fancied his or her chance.

But all this changed on December 11. As soon as the results started trickling in and it was clear that the BJP was being drubbed by the Congress, the gloom in the camps of regional parties was quite visible. They were not happy that the BJP juggernaut was being halted. Instead, they were sad and alarmed that the Congress was doing it on its own. They felt that a resurgent Congress would once again change the political narrative of the country to a two-party one, where there would be little or no space for parties based on regional ideology. Make no mistake  the regional parties fear both the BJP and the Congress almost equally. Some of them abhor the BJP more because of its anti-secular (or nationalist, as the BJP would say) ideology, but they dislike both as they feel these parties eat into their votes.

The smugness of the regional parties will now vanish. On the other hand, Congress will now sit for unity talks with a new confidence. It now knows that the 44 seat nightmare of 2014 is a thing of the past. The win in three states and Punjab and Karnataka before that, coupled with the good showing in Gujarat and Goa, has given it a bargaining power it did not have at the start of this year. The regional parties know that with these wins under its belt, they would now have to yield a lot more space to the Congress than they were either willing to or had bargained for initially. With general elections due in just a few months, this does not augur well for opposition unity.

On the contrary, it works in favour of the BJP. It is now certain that Congress is not going to yield the leadership to any other party or leader. Rahul Gandhi for PM in 2019 is going to be the Congress mantra. This firmly closes one window of negotiation. A few regional parties would be highly miffed at the changed situation, but they can do little about it. Their leaders may smart at their hopes and dreams going up in ashes but the fact remains that after these electoral victories, Rahul Gandhi has positioned himself as the only opposition leader who can take on Modi in 2019 on a pan-India basis.

Hence, the regional parties will now negotiate hard on seat-sharing. But if the Congress wants to seriously dislodge Modi and form a strong and stable government after that, it will need to have between 175- 200 Lok Sabha seats. This can only be possible if it gets a lions-share of seats in most states. The regional parties are unlikely to yield so much to the party, especially in UP, Bihar, Bengal, Maharashtra and Andhra. These states account for 232 Lok Sabha seats. Without these, the Congress will not be able to dominate the united front and even if it becomes a reality and is able to win in 2019, the government formed thereafter will be very fragile and unstable.