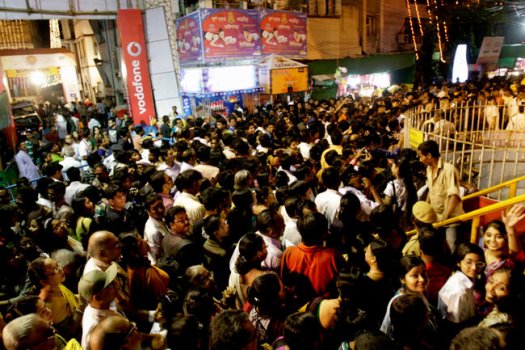 A Salute To Kolkata Police And Their Team of Volunteers

A Salute To Kolkata Police And Their Team of Volunteers

Linus tackles things head-on. He takes sides in his analysis and it fits excellently with our editorial policy. No 'maybe's' and 'allegedly' for him, only things in black and white. View all posts by this Author
Kolkata Police need to be congratulated for the way they manage the sea of people and an endless stream of vehicles during the almost 10-day long Durga Puja celebrations in the city. The throng of people and stream of vehicles has to be seen to be believed. It starts from morning each day from the first day of Navratri and continues till the early morning of Dusserah (called Doshomi, or Bijoya, in Bengal).

Every year, the police, along with an army of volunteers and NGOs, have been fine-tuning the arrangements. It has been helped in a large measure by the proactive chief minister Mamata Banerjee. The action starts each year with a meeting with the large community puja organizers when crowd management and safety measures are discussed in detail. Then, the police top brass visit all the sites, or pandals, as they are called in the state, to get a first-hand idea whether the organizers have put in place all that was discussed.

As the day approaches, the police get all footpaths and part of roads barricaded for pandal-hoppers so that they do not spill onto the roads and block traffic. Some roads are either made one-way or blocked for vehicles. This year, the arrangements were top notch. The police are helped no doubt by the peoples desire to have an early view of the pandals and the idols. Hence, what used to be a five-day affair from Panchami to Navami has now extended to ten days. This means that the crowd is spread over those days and the rush, and crush, witnessed in the past is now not as great.

Still, it is a measure of its efficiency that the Kolkata police manages to give the citizens a peaceful and incident-free Puja every year. The police top brass is on the streets every day from the evening till the early mornings the next day. The volunteers work tirelessly to ensure that traffic moves without a hitch and pandal-hoppers do not face problems. Of course, some people who live near the site of big puja pandals are inconvenienced due to restrictions (one such resident once told me that he felt he had been put under house arrest), but they bear it sportingly. The joy of the festivities is enhanced by the efforts of the police and the volunteers.