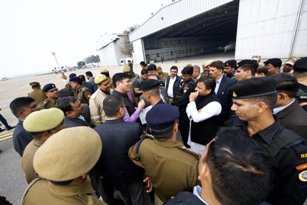 Editor-in-Chief of indiacommentary.com. Current Affairs analyst and political commentator. Writes for a number of publications. View all posts by this Author
The UP government today prevented Samajvadi Party chief Akhilesh Yadav from boarding a flight to Allahabad from the Lucknow airport. Mr Yadav was going to attend an event at Allahabad University and interact with students. The state government said it had received a request from the university not to allow Mr Yadav from visiting as it would have led to clashes between two groups of students leading to a law and order situation. Hence, the government said, it took the action in the larger interest of preventing an unsavoury situation.

But compare this to the recent protests the BJP registered when, fearing a similar or even worse law and order situation, the Mamata Banerjee government in West Bengal had first refused to give permission for BJPs proposed rath yatras in the state and then disallowed landing permission for helicopters of both Amit Shah and Yogi Adityanath. The BJP had then cried itself hoarse claiming murder of democracy in the state and claimed that Mamata Banerjee was afraid of the rising support for the party and was hence preventing its frontline leaders from visiting the state to speak to the people. What, then, should one make out of the UP governments treatment of Akhilesh Yadav?

Post the SP-BSP alliance, there are increasing reports (confirmed by recent opinion polls) that the BJP is going to suffer massive reversals in UP. The party knows that without a repeat of the 2014 performance in the state (give or take a few seats), it will become very difficult for it to retain power at the Centre. As per current polls, the party is expected to lose more than 45-50 seats to the SP-BSP combine. Although this was before the Congress changed its strategy and inducted Priyanka Gandhi Vadra in the fray, one feels that given Congress vote share, it is not going to make much of a difference if SP-BSP can work out a good formula at the grassroots level and get their seat-sharing mathematics spot on. Some people think that a resurgent Congress might upset the SP-BSP cart in three-cornered fights and the BJP might gain, but one feels that if SP-BSP votes combine, then whatever extra votes Congress gets will be at the BJPs expense and that probably increase the winnings of the combine.

The BJP must realize that it cannot have two sets of standards  one for itself in West Bengal and another for Akhilesh Yadav (or other opposition leaders) elsewhere. If democracy was murdered in West Bengal by the refusal of permissions, one feels that it was murdered and buried in UP by the physical prevention of Mr Yadav from boarding the flight to Allahabad. In any case, by stopping Akhilesh, Yogi Adityanath has achieved the opposite of what he had set out to do. Mr Yadav has turned into a hero and people are now bound to ask why the BJP is afraid of letting him speak to the students.

Also, citing law and order problem to prevent an opposition leader from interacting with the people is a specious excuse to block the right every politician has in a democracy. It can be used only against habitual rabble-rousers or pamphleteers  that too sparsely and with ample reason. It is the duty of the government in power to ensure that law and order do not go out of hand. If the government says that this or that person might endanger public harmony, it is admitting that it is not capable of maintaining law and order. This is a very dangerous thing in a democracy. What if Mr Yadav had resorted to addressing the students by video-conferencing? How would the government have stopped that? In any case, the governments action caused more law and order situations across the state, with SP supporters agitating against it for the action on Mr Yadav, than the situation that could have arisen if he was allowed to visit Allahabad and interact with the students.