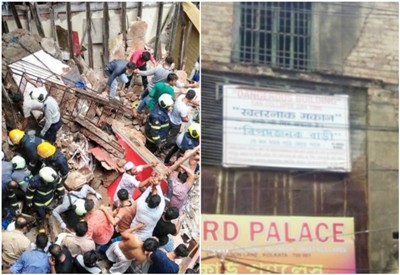 Address The Problem Of Dilapidated Buildings That Are Collapsing

Address The Problem Of Dilapidated Buildings That Are Collapsing

The collapse of a dilapidated structure (in all earnestness, it cannot be called a building as it had ceased to be one a long time ago) in Mumbai that killed more than a dozen people once again brings up the question as to what should be done with these structures that dot almost all cities and towns in India. This writer had written on the subject when a similar building had collapsed in Kolkata last year. The body count was mercifully just two then. But the shock and trauma were the same.

There are thousands of over 100-year old buildings in many cities and towns of India that are on the verge of collapse. Incessant rains or vibration induced by a natural happening like an earthquake or heavy construction activity nearby can bring them down any time. Yet, neither are these buildings pulled down nor do the occupants (owners as well as tenants) vacate them. Despite the attached risks, they choose to stay on as it is extremely difficult and costly to arrange alternative accommodation in most Indian cities.

What does the Municipal Corporation, municipality or the panchayats do in such a case? They just hang a board that warns people that the building is dilapidated, unsafe and dangerous but do not take any measures to get it vacated. In fact, there is no law in India under which it can be done. This poses a huge risk to the occupiers of the building or to those who visit them. Even the surrounding buildings and passersby are at risk as the debris from the collapse can fall on them, causing damage to property and life and limb.

Redevelopment of these buildings is often not possible as the owners and the tenants do not come to an understanding. While tenants ask for the moon to vacate the premises to facilitate redevelopment, the promoters often offer much less and sometimes even use strong-arm tactics to eject tenants. While promoters often point out that tenants have been paying peanuts as rents (some even defaulting on that small amount) and do not deserve the king's ransom they demand for moving out, tenants often cite that their forefathers had paid huge salami (an upfront cash component one needed to pay to take possession of rental property some decades ago) to acquire the lease and they are only demanding that back, with interest of course. Several prime plots remain undeveloped for this reason, with tenants often uniting and entangling the promoter in court cases.

But when some buildings are collapsing and many others are on the verge of falling down, the time has come for urban bodies and the state governments to do something more than just hang a board (see the lead picture) saying that the building is condemned and not livable. If the government can give huge amounts to the poor to construct houses, it can also take over these dilapidated buildings (if the owner is unable or unwilling to redevelop them) and reconstruct them to benefit the tenants. If it does not want to get involved in construction, as the next best alternative, it can have a body (perhaps a wing of the civic body) that can broker peace between the tenants and the owner/promoter and ensure redevelopment after an honest and just settlement. Some of these buildings have more than 100 tenants and are hugely vulnerable. Despite the warning by the civic body and the inherent danger of living in a building that might collapse any day, these tenants do not move out because they have nowhere to go. More such tragedies will happen if urban bodies are not proactive in this regard.