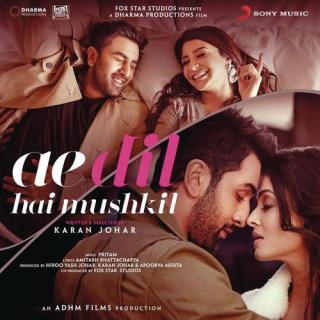 Editor-in-Chief of indiacommentary.com. Current Affairs analyst and political commentator. Writes for a number of publications. View all posts by this Author
In an earlier article this writer wrote to support the release of Ae Dil Hai Mushkil that India deserves to see how Johar has filmed the heartbreaks, heartaches and patch-ups in his ode to love. After watching the film, one feels that Johar has made a highly stylized product in his trademark style. But the film, to quote a dialogue from it, neither has the junoon of love nor the sukoon of friendship.

Alizeh (Anushka Sharma) believes in the sukoon of friendship, but Ayan (Ranbir Kapoor), whom she considers her bestest friend, is junoonly in love with her. She keeps rebuffing him, telling him that she does not want to spoil their beautiful equation by jismani entanglement. On a day when he is especially insistent, she tells him pointblank that she loves him more than anything else, but it is not that kind of love. Before he has the time to even try to turn it that way, along comes DJ Ali (Fawad Khan, wasted in a sleepwalking role), Alizehs ex. She goes back to him and finally marries him. A heartbroken Ayan sings a beautiful song on her wedding day and when she confronts him, breaks down but is not able to make her heart beat for him that way.

A shattered Ayan befriends Saba (Aishwarya Rai Bachchan), an enchanting poetess and a divorcee to boot. She opens her arms to Ayan in a purely physical relationship as she says that she has travelled the route and does not want emotional attachments. She is friends with her ex (Shahrukh Khan in a surprise cameo) and when Ayan meets him, he is explained how a one-sided love is better than a love that is consummated. A confused Ayan unblocks Alizeh on his mobile and calls her. She meets him again and Ayan tries to convince her about his that kind of love again. But she is not shaken. Ayan also loses Saba when she realizes she is falling in love with him. When he tries to explain, she stops him saying that she does want to bikhro. Ayan goes to Alizeh and tells her that he is going away and asks her to be there for him.

Ayan then goes on to become a famous singer. He meets Ali one day in London on his singing tours and comes to know that Alizeh has left him. Ali also tells him that Alizeh is in London. Ayan goes to look for her on the terrace of the building that she had told him that she founded sukoon when she was upset. He waits two days before she shows up. She tells him that she is suffering from cancer (fourth stage) and is about to die. He shows solidarity by shaving his head as chemotherapy had made her bald. While looking after her, he once again tries to get physical. She once again throws him out. When he comes back to say sorry, he finds that she has left for the airport. He calls her and begs her not to go. The last few minutes are full of melodrama and you have to see for yourself to find out how Johar ends it.

Ae Dil Hai Mushkil is saved only due to outstanding performances by both Anushka Sharma and Ranbir Kapoor. As the bindaas girl hopping discos with a new found friend, Anushka goes into the role with an abandon that does wonders for the script and augurs well for her future. Ranbir Kapoor brings out the bafflement and vulnerability of a person who is not able to understand how a girl can love a boy so much and still say it is not that kind of love. The torture he suffers in his one-sided love comes out well and he even tells Alizeh that it hurt his ego that she does not love him that way. The film is also marked by some soulful lyrics. When Ayan sings andhera tera maine le liya, mera ujla sitaara tere naam kiya, your heart beats for him. Sadly, it does not beat again for the rest of the movie.

Karan Johars heart is in the right place. He wants to tell us that a boy and a girl can just be friends without that kind of love. But spending nearly three hours to see Ayan realize this, and that too when Alizeh is about to die, is too much. The movie sparkles in the first hour when Ayan and Alizehs friendship is being mapped, with large doses of Bollywood  snatches from songs and dialogues of old films  being thrown in. But many times, scenes seem repetitive. It is only their repartee that keeps things going. Karan Johar's ode to love and friendship is mostly just time-pass. It is mushkil to say why, but the film leaves one unsatisfied.