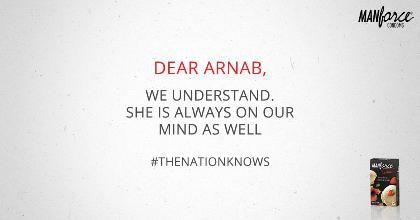 He was immediately, and brutally, trolled on Twitter. People say such slip of tongue is unpardonable for news anchors on national TV. They say that Goswami is guilty of having confused Rahul Gandhi with Narendra Modi earlier too. They are of the opinion that Goswami should reduce his decibel level and increase his intelligence quotient.

The fun really started when actor Sunny Leone joined in. She tweeted Leading by how many votes???? to raise Goswamis discomfort level and allow people to ROFL. But the cake in this issue was taken by the digital team of Manforce condoms, the brand that has Sunny Leone as its ambassador.

Manforce was quick to put out a meme that said Dear Arnab, We understand. She is always on our mind as well and tagged #TheNationKnows, the show that Goswami anchors.

People say that Arnab Goswami should be more careful in the future.