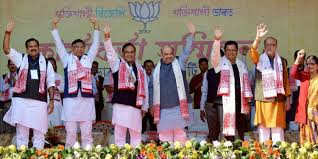 Editor-in-Chief of indiacommentary.com. Current Affairs analyst and political commentator. Writes for a number of publications. View all posts by this Author
The old order gives way to new is a saying that does not apply to the Congress party. Anti-incumbency takes many forms and resentment within party ranks and the general public against an 81 year old satrap who has ruled the state indifferently for the last 15 years was growing and visible to all but the Congress high command. It did not wake up to the problem even when its most efficient and resourceful state leader Himanta Biswa Sarma petitioned it to force a change of guard in the state several months ago. Congress was smug â Gogoi fed it the line that he was there and after him, his son Gaurav was there to carry on the âgoodâ work. Rahul Gandhi fell for it hook, line and sinker and will repent in leisure.

Gogoi has been lording over Assam Congress much like the Gandhis are over the party at the national level. Given its feudal nature, the party high command did not want to disturb a loyal local satrap who has been with the Gandhis through thick and thin. But there comes a time when loyalty has to be sacrificed to achieve long term goals. Gogoi should have been made to realize that a government led by Himanta Biswa Sarma, with Gaurav Gogoi as a minister, was its best bet to counter a rising BJP in the state. But Rahul Gandhi treated Sarma as an upstart and chose to go with Gogoi. Obviously, he had his reasons but they have misfired badly.

The BJP on the other hand did everything right in the run up to the elections. It admitted a disgruntled Sarma, gave him enough responsibilities and let him loose on his old party. Sarma, with his organizational capabilities and resourcefulness (read collection of funds for the party) became an asset to the party. On his part, Sarma worked tirelessly to augment the RSS network and suddenly, the BJP became a front runner is seats where traditionally the Congress held sway. Then, Sarbanada Sonowal was projected as the CM candidate well in time. His youthful face swayed a large number of voters. Also, there is no doubt that the Modi factor is strongest in Assam. The PMâs rallies have attracted huge turnouts by state standards. These have converted into votes at an impressive strike rate. The party also made sensible alliances with the AGP and the BPF. Finally, the BJP has used the RSS network in upper Assam to its benefit in spreading the message of development. Disenchanted voters have put their trust in the party. Gogoi was living on borrowed time for the last two years, ever since the 2014 Lok Sabha results showed BJP sweeping the state. Congress and Gogoi did not take any action to rectify the situation and voter discontent increased in these two years, culminating in an unsung farewell when it mattered.