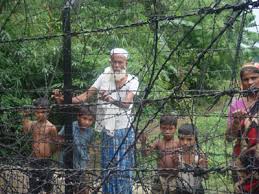 By our team of in-house writers. View all posts by this Author
Stopping infiltration from Bangladesh was a major campaign plank of the BJP in Assam. The north-eastern state has a large border with the neighbouring country which is porous and indifferently policed, leading to unchecked infiltration of illegal migrants. Another kind of infiltration is that of the day-migrants, who enter India in the morning for work or commerce and go back to their homes in Bangladesh after dark. Chief Minister Sarbanand Sonowal conducted a two-day survey and found that there are several discrepancies that have allowed this.

Apart from the usual shortage of personnel in the Border Security Force, there are stretches in the border that have difficult terrain. While security forces find it difficult to police these stretches, they are favourite crossing points for miscreants. Assam has been bearing the brunt of illegal immigrants from Bangladesh. These people have changed the population profile in several border districts of the state. Widespread corruption means that these people have no difficulty in getting residency papers. Others who had crossed over earlier help them in assimilating with the local population. After a few months, it is very difficult to identify them.

Hence, preventing infiltration at the border is the best way to tackle this problem. But this is easier said than done. No two democratic countries have ever managed to completely seal their borders. There are problems of logistics, manpower, funds and political will. Homogenous population makes detection difficult. Corrupt officials also have a hand in illegal transfers of goods and people. But one thing is certain: no one can enter India illegally and stay and work here unless people from this side of the border help them at all stages. In our cities and villages, local people are quick to spot and question unidentified loiterers. If this is not happening in border districts, it is obvious that it has become a profitable racket involving millions of rupees.