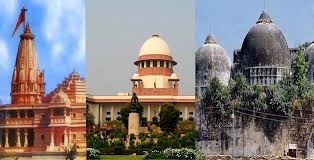 Editor-in-Chief of indiacommentary.com. Current Affairs analyst and political commentator. Writes for a number of publications. View all posts by this Author
The Supreme Court has ordered mediation in the Babri Masjid-Ram Janmabhoomi dispute, despite knowing that there have been numerous efforts at mediation in the past and all of them had failed. How then does it think that the panel now appointed by it will succeed, especially when one of the members of the panel has a record of making statements that can be construed as being biased towards the Hindus? The saving grace is that the court has allowed only eight weeks for the process, keeping in view that almost the same time will be needed to prepare for the final hearing in the case and then the final order. Also, it is better for social harmony to explore all options before doing what needs to be done as per law.

The court must decide on the title suits under consideration. There is no other visible way of resolving the dispute. Obviously, if mediation is successful then all parties will be happy as a court order generally aggrieves one or more parties to a suit. But if after eight weeks there are no signs of an out of court settlement through mediation, the court will have to pronounce its verdict on the title suits. The court had, in a landmark judgment in 1994, refused to be drawn into the faith-based question of whether a Ram Temple existed at the disputed site and was demolished to build the Babri Masjid. Hence, following the due process of law, the decision on the title suits should once and for all resolve the dispute.

Although all parties to the dispute have time and again said that they will abide by the order of the court, it is doubtful whether those bent on building the temple at the exact spot will be pacified if the order goes against them. Mandir wahin banayenge has now become more than a matter of faith  it has become a war cry to show the Muslims who is the boss. The Allahabad High Court had suggested a three-way split of the land in Ayodhya between Ram Lalla, the Nirmohi Akhara and the Sunni Wakf Board. That verdict is still under appeal. For peace and harmony to prevail, there must both be a grand Ram Mandir and a restored Babri Masjid at the site. But it can only be possible if the Supreme Court finds that the title in the land vests with all three parties and divides the disputed land accordingly and more importantly, the government is fair to both the communities.