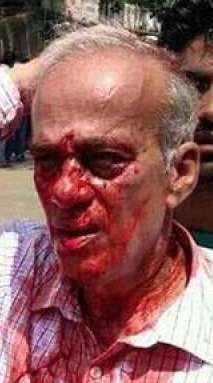 Bengal: Attacking A Septaugenarian Opposition Leader is Crossing the Line

Bengal: Attacking A Septaugenarian Opposition Leader is Crossing the Line

Editor-in-Chief of indiacommentary.com. Current Affairs analyst and political commentator. Writes for a number of publications. View all posts by this Author
With booth capturing and its refined cousin, booth jamming, having become crude and hence passé, the ruling TMC in Bengal has found a new way to use its goons. Now these musclemen are deployed to prevent opposition candidates from filing their nomination papers. But there are certain lines that must not be crossed. One such line is taking every precaution to ensure that veteran politicians are never attacked.

But such is the dominance of one party in Bengal that no lines are sacrosanct for it. While party supremo and chief minister Mamata Banerjee pays a courtesy call to ailing former chief minister of the CPM, Buddhadeb Bhattacharya, her party goons attack septuagenarian Basudeb Acharia of the same party in Birbhum district, some 190 kms from state capital Kolkata. He had to be admitted in ICU. His fault was that he was leading a procession with the candidate going to file his nomination papers for the ensuing panchayat polls in the state. It was shocking to see Acharias blood-stained face and shirt.

When KCR came to visit Mamata in Kolkata to explore setting up a third front against the BJP, in an aside she had said that one party should not rule. But the actions of her party leaders and workers are solely focused on ensuring an unhindered single party rule in Bengal. So is there a different yardstick when it comes to her backyard? Using every trick in the book, Mamata Banerjee has been eliminating all opposition in the state. She has reduced the CPM to a shadow of its former self. Congress is still alive in pockets of Malda and Murshidabad districts, but just so. The BJP is improving its vote share but does not have the infrastructure to make a dent. But now her party workers are using fear psychosis to stop people from even filing their nominations.

Before the attack on Acharia, TMC goons had brutally attacked BJP and Congress candidates and workers all over the state. But the attack on the 75-year old Acharia was plumbing the depths. It was an unprovoked attack that must be condemned by all right-thinking citizens. What is TMC afraid of? There is practically no opposition in the state. The party claims that the people are with it because of its record of good governance. Then why is it preventing candidates from filing nominations? Is it afraid that the peoples mandate will go against it? A party that is such a dominant position should be magnanimous. But with musclemen itching to get into fights every time there is an election, it seems the partys top brass has little or no control over them.