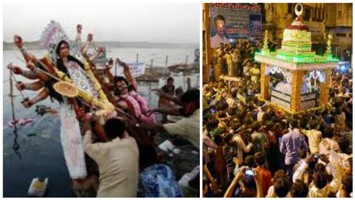 Editor-in-Chief of indiacommentary.com. Current Affairs analyst and political commentator. Writes for a number of publications. View all posts by this Author
Vijaya Dashami, the tenth day of Navratri, is celebrated as the day when Ma Durga goes back. Hence, the idols are immersed in the river Hooghly in Kolkata and other rivers and ponds in the rest of Bengal. This year, Dashami has fallen on 11th October. A day after, on 12th October, is Muharram. The Muslim community takes out tazia processions on 11th October. Hence, the Durga immersion processions and the tazias were expected to clash. So what does the Bengal administration do? It issues a notification restricting immersions till 4 pm on Dashami, to facilitate tazias. That was the easiest way out for the government.

But a PIL was filed in the Calcutta High Court. The court was scathing in admonishing the Bengal government, mainly for taking the easy way out and for pandering to one community at the cost of the other. The court said that if the government cannot ensure peaceful celebration of both events, it had no business being in power. It said that the immersion of idols always takes place on Dashami. So if Muharram falls the next day this year, it is the tazias that have to be rescheduled and not the immersions. It also said that a secular government must treat all religions equally. Hence, restricting one and facilitating another will not do. Hence, the court ordered that immersions will be allowed to be done till 10 pm as usual and if tazias were also to be allowed by the government, then it should ensure that both events take place peacefully.

The court has taken an eminently sensible view. Such administrative decisions are the root cause of rising support for Hindutva elements in the country. It gives fuel to the argument that the minority community is appeased for no reason at all, just for their votes. The court gave the example of Allahabad where some of the biggest tazias are taken out. But in view of the Dusserah festival, the administration there allows tazia processions only the next day. Decisions like the one taken by the Bengal government have the potential of alienating a large section of the citizens and can also lead to trouble. It could have asked the Muslim community to take out the tazias in the morning. But it wanted to show them that it was giving them special treatment. This does not behove a government in a secular country. It is sad that the courts have to intervene to set things right.