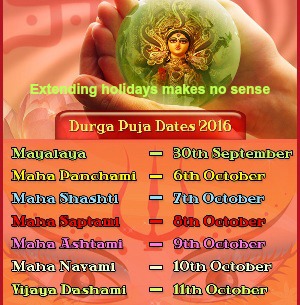 Bengal: Does it Make Sense to Close the State for 11 Days?

Bengal: Does it Make Sense to Close the State for 11 Days?

Editor-in-Chief of indiacommentary.com. Current Affairs analyst and political commentator. Writes for a number of publications. View all posts by this Author
When the Bengal government had shown unusual toughness in dealing with strike calls  the first when all-India unions called a strike and then when the Gorkha Janmukti Morcha called one in the hills of Bengal  one thought that winds of change were blowing in the state. One also thought that it augured well for the growth of the state as investors, frustrated at the bandh culture, would take note of the new government attitude and perhaps Bengal would again find a place on their investment radars. But the joy was short-lived.

As Durga Puja approached, the Mamata Banerjee government stunned everyone by announcing an unheard-of 11 day period of holidays (including two Sundays in between) in the state. Starting from Thursday, 6th October, all offices of the Bengal government will remain closed till 16th October. This unprecedented move will further tarnish the reputation of Bengal as a state with little or no work culture, forever happy to close offices and refrain from doing any work.

The government could have easily avoided this situation by announcing the holidays from Mahasaptami on Friday the 8th October till Muharram on Wednesday the 12th October. It could have kept the offices open on Thursday, 13th and Friday, 14th of October and then given a holiday on Saturday, 15th October for Lakshmi Puja. This would have reduced the number of holidays to 6 (not counting the Sundays in between) and would have complemented the tough measures undertaken earlier during the strike calls. It would have also sent a strong signal to investors that the government meant business.

Although it is no ones case that employees be called for duty during the biggest festival of the state, it also does not make sense to close down the government for 11 continuous days. Hence, the best way would have been to adhere to the days that were mandated by the almanac as holy days and cut out the rest. But then if those who take these decisions are themselves enamoured of spending time away from the chaos that prevails in the state during the Pujas, one can only expect them to extensions like these. It allows them to make plans for longer holidays at places far away, perhaps even abroad. In this, please spare a thought for the personnel of Kolkata and West Bengal Police, traffic wardens, civic workers, volunteers and NGOs who spend their holidays, sometimes being on duty 24X7 for at least 8 to 10 days during the festival, in making it safe and orderly for the rest of us.