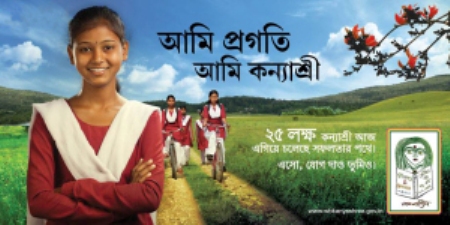 Anukriti is a student who dabbles in writing when she finds time. View all posts by this Author
Prime Minister Modi had coined a slogan Beti Bachao, Beti Padhao to prevent female foeticide and empower girls through education. West Bengal chief minister Mamata Banerjee took it forward in the real sense by introducing the Kanyashree scheme in the state schools. Her effort to ensure that girls did not drop out of school and were married off before the legally permissible age of 18 has been highly successful. The world has recognized this fact: the United Nations has given its top social service award, the UNPSA for 2017 to Kanyashree scheme of the Bengal government, recognizing it as the most effective scheme in achieving what it set out to do. There were more than 70 competing schemes from all over the world. That Kanyashree won goes to prove that if politicians in India decide to better the lot of the people and bring about social change, they can do it if they can sideline crony capitalists and show political will.

Kanyashree has been one of the pet schemes of Mamata Banerjee. It goes beyond hype and achieves much through direct subsidy transfers in the bank accounts of children. Since the money is put into bank accounts of girls already enrolled and attending school, there is no chance of leakages or agents cornering the benefits meant for the girls. This is a scheme that should be studied by both the Centre and other states and implemented on a wider scale all over the country. After a long time, Bengal has shown the way to the rest of the country.