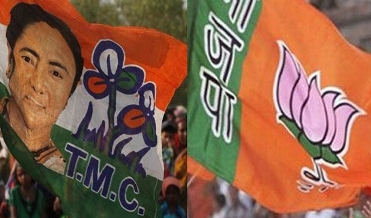 View all posts by this Author
The exit polls for West Bengal have confirmed one thing  Mamata Banerjees hold over the state is weakening. Although the TMC vote share is not expected to fall, the party has neither been able to attract new converts nor has it been able to prevent the BJP from consolidating and taking over the votes of former Left and Congress voters. The net result is that while the TMC vote share remains stagnant, that of the BJP is increasing by leaps and bounds in each successive election. It also means that the BJP is emerging as a formidable opponent, one that cannot be as easily brushed aside as the Left and the Congress, especially as it is likely to get another term at the Centre.

Both parties fought tooth and nail and that resulted in sporadic violence in all seven phases of the polls. It also led to intense bitterness between Modi and Mamata. Modi called her speed breaker Didi for not allowing development in the state and sticker Didi for renaming Central schemes and putting them out as her own while Mamata called him expiry PM and the greatest danger for the country. She said that he will get the slap of democracy when the people will throw him out in the elections. She also said that she refused to acknowledge him as the prime minister when she did not return his calls post the cyclone Fani. The bitterness culminated in violence during BJP president Amit Shahs roadshow in Kolkata when Vidyasagars bust was desecrated by hooligans and both parties accused each other of the crime. When Modi subsequently offered to replace the bust with a new one, Mamata spurned the offer by saying the Bengal did not need BJPs alms.

But if the results are close to what the exit polls (which Mamata has derisively dismissed as gossip) are predicting, then it will be clear that the BJP has made massive inroads into a state where it had little or no infrastructure and no good local leadership. It also means that the BJP has been successful in getting the erstwhile Left voter to its fold. More certainly, it also means that the bhadralok Bengali, till now consumed with secularism and fairness for all, is now being persuaded to vote for a party that is against minority appeasement. This trend must be extremely worrying for the TMC as assembly elections are just 2 years away.