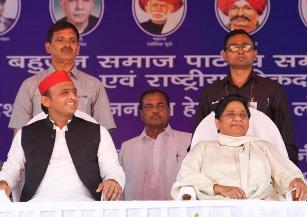 If Leaders Divide The Opposition, Will People Consolidate The Votes?

If Leaders Divide The Opposition, Will People Consolidate The Votes?

Editor-in-Chief of indiacommentary.com. Current Affairs analyst and political commentator. Writes for a number of publications. View all posts by this Author
The so-called mahagathbandhan in UP, comprising the Bahujan Samaj Party, the Samajwadi Party and the Rashtriya Lok Dal along with a number of smaller parties, held its first rally in the state at Deoband today. The choice of the town (Darool Ulum, the respected Muslim seminary is located in Deoband) for the first pitch by the alliance became clear once Mayawati ranted against the Congress for playing into the hands of the BJP by fielding candidates who would split opposition votes and asked the Muslim community, in particular, to ensure that votes are not split. She claimed that the Congress was not strong enough to fight the BJP and only the mahagathbandhan was capable of stopping the juggernaut of hatred unleashed by the BJP.

But who brought things to such a pass in the first place? For the last one year, the opposition parties, including almost all the regional parties not aligned with the NDA, and the Congress have been talking about how the BJP is dividing the nation and crushing all its hallowed institutions. They have time and again stressed the need to fight the BJP unitedly. Mayawati was seen hobnobbing with the Congress leadership and sharing a warm relationship with Sonia Gandhi. But when the time came to form an alliance, it was Mayawati who ruled out having any truck with the Congress and formed the present alliance.

Even if we agree with her that the Congress is a spent force in UP, the grand alliance could have at least prevented three-cornered contests in more than 70 UP seats if it had yielded 6-8 additional seats to the Congress apart from Amethi and Rae Bareilly (the grand alliance is not putting up candidates on these two seats where Rahul and Sonia Gandhi are contesting). The Congress had no option but to put up candidates on all UP seats once Mayawati dismissed it derisively. It seems that Mayawati was blinded by her burning ambition to be prime minister and she ignored the fact that she can be the PM only if the opposition wins and the opposition can win only if votes are not divided.

If Mayawati thinks that 36-40 seats for the alliance in UP and maybe one or two for the BSP in some other states will make her the main contender for the post of the prime minister in the event of a hung parliament if the NDA gets less than 250 seats, she is contending with a lot of ifs and is daydreaming. For, she has to contend with the claims of Rahul Gandhi in the event the Congress gets between 80-100 seats and the UPA gets 120-130 seats or that of Mamata Banerjee if the TMC gets between 36-40 seats. Any post-poll alliance of UPA with other regional parties will not materialize only because of this leadership issue. Further, if the NDA does not get an absolute majority but comes near it with, say, 240 seats, then it can tempt the uncommitted  the TRS, the YSR Congress and the BJD - with loaves of office to form the government.

One feels that Mayawati and the grand alliance in UP have made a huge blunder by excluding Congress from their scheme of things in the state. If the opposition is not able to put it across the NDA in these elections, it can be safely said that it will be because of Mayawatis intransigence regarding admitting Congress in the UP alliance. For, another 20 seats could have been won by the alliance (it is now expected to win between 36-40 seats) if there were straight fights in UP and that would have reduced the NDA to below 220. From there, it would have been difficult even for the wily Amit Shah to form a stable government.