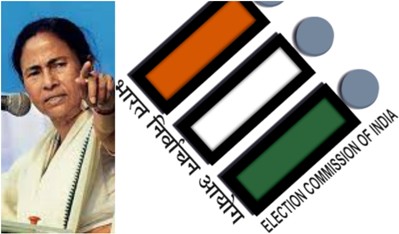 View all posts by this Author
True to form, Mamata Banerjee has lashed out at the Election Commission for transferring several officers, including the Kolkata Police Commissioner and the CP of Bidhannagar Commissionerate. It has become a habit with her to contest all decisions of any Central or independent authority. She did it in 2014, she is doing it now. In 2014, she ranted against the EC when it similarly transferred senior police officers before the general elections. She called the EC "super god" and said that the poll panel body was involved in a political game planned by the Congress, CPIM and BJP. This time, given the new status of the BJP as the main opponent in the state, she says that the EC is acting at the behest of the Centre. Despite accusing Modi of destroying the nations institutions, Mamata herself has shown scant respect for even the routine work of independent organizations like the EC, let alone Central agencies.

But the Election Commission has shown a great deal of alacrity in replying to her letter. It called her allegation of bias unfortunate and said that it would not be correct and dignified to respond to such averments to prove/burnish its credentials. Chiefly, the commission pointed out that it was within its right to transfer officers under powers granted to it by Section 28 of the Representation of the Peoples Act, which was further fortified by a 1994 judgment of the Kerala High Court. The EC quoted from the high court to say that the Commission can issue directions regarding posting and transfer of officers who are deemed to be on deputation to EC by virtue of powers exercised under Article 324(6) of the Constitution read with sec 13CC of RP Act, 150 and sec28 of RP Act, 1951.

It seems the West Bengal chief minister does not learn from past experience and takes every such issue as an opportunity to try and further establish her anti-Centre credentials. In 2014, after spewing much fire, she went by the note of the then state chief secretary Sanjoy Mitra who suggested that it would be wise for the government to go by the ECs order. She had accepted it then and had said that all these officers whom the poll panel has transferred are my officers and I will bring them back to their old positions after the polls." That is precisely the point. The EC has charge of all states and its officers only till the model code of conduct is in force. Once the elections are done with, the state can reinstate the officers. Then why create such a fuss for a few days or weeks? Why try to interfere with the work of the EC? It is not the sign of a true democrat.