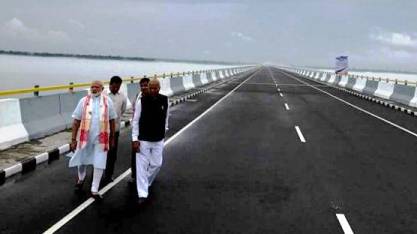 By our team of in-house writers. View all posts by this Author
People are talking about the newly-christened Bhupen Hazarika bridge that Prime Minister Narendra Modi dedicated to the nation on May 26, 2017 in tandem with celebrating the third anniversary of his government in Assam. From what little the people got to see on television and read in the newspapers, the people are marveling at the fact that such world class construction was done at such good pace after the NDA came to power.

The people are also commenting on the fact about how the UPA and the Congress government in Assam tried to scuttle the project by going slow. This bridge was started when Atal Bihari Vajpayee was PM. Later, it slipped out of priority as the Congress always treated the North-East as a money making machine and funds were siphoned out through the politician-contractor nexus.

The people are also commenting how the bridge will make accessibility to Arunachal a lot easier, saving 4 hours of time and allowing heavy trucks to enter the sensitive state. People feel that many more such projects need to be undertaken to bring the north-eastern states closer to the people of India. Those who have visited the region are of the opinion that once infrastructure is in place, the region will benefit hugely from tourism, especially since Kashmir is perennially on the boil.

Those in the know are also talking about soon to be completed Bogibeel bridge which they say will be a greater boon as it will also have rail link. They say that with the completion of Bogibeel, Arunachal will be truly integrated with the rest of India. People are buoyant about rapid development of the region under the Act East policy of this government.