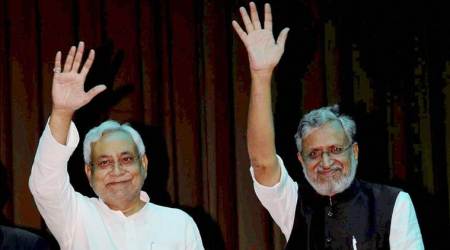 Editor-in-Chief of indiacommentary.com. Current Affairs analyst and political commentator. Writes for a number of publications. View all posts by this Author
That two wrongs never make a right and inner voices can be confusing is proved in developments in Bihar. The first wrong was done by the governor. When Nitish Kumar resigned, the assembly must have been dissolved and fresh elections must have been called, as the peoples mandate last time was for rule by alliance and with the alliance in tatters, there was a need to seek a fresh mandate. The second wrong was done by Nitish himself. Having got the peoples mandate to rule as an alliance partner, he was wrong in tying up with the BJP to start another innings as Bihar CM. It proves that his inner voice has both angels and demons and his holier than thou image is just a facade. The angelic inner voice made him resign as he did not want to pander to Lalu Yadav and his corrupt clan. The demonic voice made him seek BJPs hand to perpetuate his reign. Nitish Kumar has proved that he is just as opportunistic as any other politician.

A lot of behind the scene drama has been reported to have taken place in which each of the dramatis personae was trying to protect his interests. It was reported that Lalu Yadav sought the Centre help in quashing cases against his clan in return for ditching Nitish and bringing BJP in the fold in Bihar. It was reported that on hearing Lalus moves, Nitish got into the act and revived his earlier channels in the BJP to preempt such a happening. He made known his desire to ditch Lalu. The BJP did what was best for it  after all, the squeaky clean Modi image could not be tarnished by allying with the corrupt Lalu clan. But maybe Nitish has overplayed his hand. There are murmurs that many in the JD(U), including Sharad Yadav, have not taken kindly to his haste in embracing the BJP. If these murmurs gather wind, the JD(U) might split once again.

But the worst role has been played by Rahul Gandhi and the Congress, once again underlying the fact that under Rahul, the Congress is fast losing even its remaining relevance. It has been reported that with all the drama being played out in Patna, a senior Bihar Congress leader was kept waiting for three days by Rahul Gandhi before being granted an audience. Apart from cursory attempts at bringing about truce, Rahul did nothing concrete. For instance, he could have flown to Patna and brought the two leaders face to face to thrash out a solution and keep the mahagathbandhan going, especially since 2019 is not very far off and if Rahul has any pretensions of leading the opposition charge against Modi, he has to keep the flock together.

But now that Nitish has crossed over, opposition unity has definitely suffered a setback. Not very long ago, Nitish was being touted as a possible candidate to take on Modi in 2019. Now the opposition is back to square one. If Rahul thinks he can lead the opposition charge with his half-baked comments and inane asides, he is sadly mistaken. The measure of his lack of popularity is evident in the way even second rung Congress leaders bad-mouth him off the record. The top rung does not, for they know that without the Gandhi family glue, the Congress will fall apart. But whatever the outcome a year down the line, the opposition has lost a stalwart due to Congress inaction.