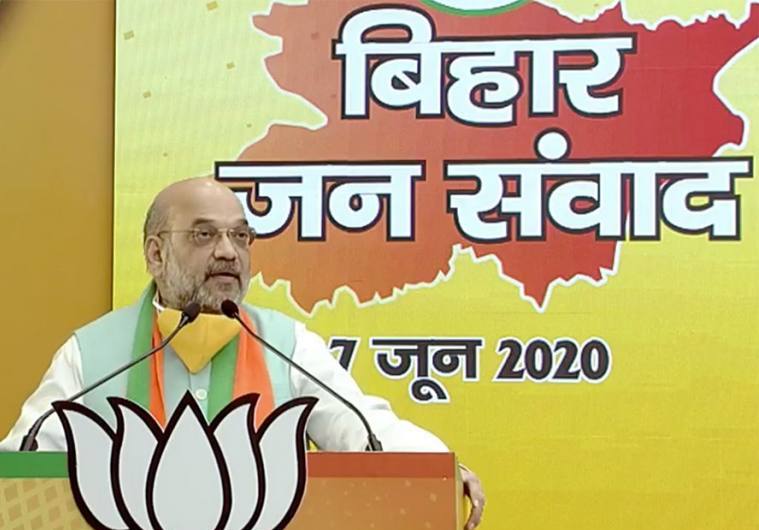 Bihar: BJP-JD (U) Upbeat, But It Is Not Going To Be A Cakewalk

Bihar: BJP-JD (U) Upbeat, But It Is Not Going To Be A Cakewalk

Amit Shah kicked off the campaign for the ensuing state elections in Bihar by digitally addressing party workers in the state. It provided a glimpse of how election rallies will look like for a long time now as the country grapples with the fallout of the pandemic. Shah was upbeat and predicted a two-thirds majority for the ruling alliance. He also waxed eloquent on the 'exemplary' way in which Prime Minister Narendra Modi had handled the Covid-19 crisis and also praised Nitish Kumar for his efforts in containing the spread of the virus in Bihar. He also said that the BJP-JD(U) alliance had delivered on good governance.

But the ground reality is different. Nitish Kumar's track record in this term of office has been uninspiring, to put it mildly. There have been no fresh initiatives by the government and the state seems to be running on auto-pilot.  Nitish Kumar has, throughout the current term, never displayed the zeal with which he transformed Bihar in his first and second terms as chief minister. Kumar was slow to react when the migrant crisis erupted despite Bihar having a huge workforce that is employed in other states. It is still searching for responses as the return of migrant workers has caused a huge spurt in coronavirus cases. If voting is held purely on the basis of performance, the ruling alliance might even lose.

But the alliance is lucky to have the better of the caste calculations, the major plank on which elections are lost or won in the state. The BJP brings in the upper caste votes while the JD (U) gets the backward communities and the Dalits. With a part of the Yadav's also ditching the opposition RJD during the Lok Sabha elections, this translates into a winning combination. But the RJD, despite Lalu Prasad being in jail and Tejaswi Yadav not showing the same charisma, is a formidable opponent. It has the state's sizeable Muslim community on its side and if it can win back the Yadav vote, it can still spring a surprise. The BJP-JD (U) alliance cannot take things lightly and will have to be spot-on in the selection of candidates and will have to counter local issues that may crop up. It will also have to provide employment to the vast number of returning migrant workers if they choose not to go back. In that case, remittances will also dip significantly and it will have to manage the economy with a depleted coffer. It is not going to be a cakewalk despite the state of the opposition.