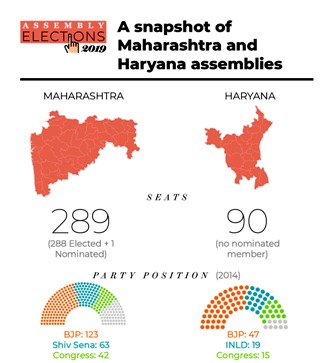 BJP+ LIkely To Sweep Both Maharashtra And Haryana

BJP+ LIkely To Sweep Both Maharashtra And Haryana

As the Election Commission has announced the dates for the elections in Maharashtra and Haryana along with more than 60 bypolls all over the country, the politicians will once again move into the campaign mode. The polls in the two major states, as well as the bypolls to 15 seats in Karnataka that will decide the fate of the Yediyurappa government, will be closely watched because of the pitiable condition which the opposition finds itself in.

The BJP and the Shiv Sena have a seat-sharing arrangement whereby both of them are contesting an equal number of seats. The two parties have ironed out most of their differences and given the fact that recent developments like abrogation of Article 370 has brought them even closer, their election machinery is well-tuned to stream roll the opposition. It just remains to be seen how big their victory margin is.

In Haryana, the picture is the same even without an ally. The BJP is stronger this time than in 2014. An additional factor in its favour is the fact that Deepinder Singh Hooda had praised the Centre for abrogating Article 370 and there were rumours of both him and his father and former CM Bhupinder Hooda switching to the BJP. Although that did not materialize, it is sure that the BJP is going to win this time by a bigger margin.

The Karnataka bypolls are likely to be tricky. The Congress is going to go all out to retain the seats by painting the defectors as traitors. Although these seats have traditionally favoured the Congress, if the BJP gets its caste maths right and if the defectors rally their supporters around the party, there is no reason why it cannot win. In any case, the BJP has to win 6 seats to retain the majority and Yediyurappa is likely to deliver these. Elsewhere, the bypolls are expected not to throw up any surprises with the incumbent parties winning the polls.