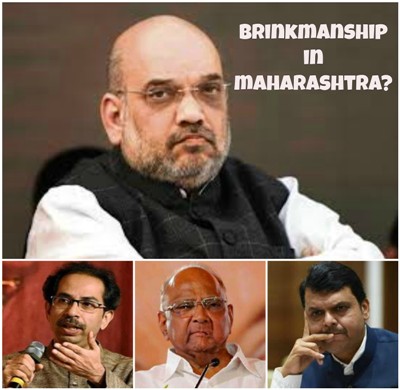 Political temperatures are rising once again in Mumbai. There has been a lot of activity with the BJP leader Narayan Rane meeting the governor B S Koshyari and asking him to impose President's rule in the state as the Maha Vikas Aghadi (MVA) had 'failed'. Later, NCP supremo Sharad Pawar met chief minister Uddhav Thackeray and Sena leader Sanjay Raut after which Pawar said that though Devendra Fadnavis was impatient, the MVA government was safe. Rahul Gandhi queered the pitch further by saying the Congress is not a "key player" in the government, possibly trying to distance the party from a messy collapse. After that, Congress leader Sanjay Nirupam attacked the chief minister. Nirupam questioned the flip-flops of Thackeray and said that if he communicated more frequently with alliance partners, the situation would not have deteriorated.

All this has led observers to believe that all is not well with the MVA alliance. As Rahul Gandhi's statement and the hurried meeting between the top brass of the Shiv Sena and the NCP proves, the real tiff is between the two regional heavyweights. Pawar, it seems, is not happy with the Thackeray has been going about his work, especially his handling of the Covid-19 crisis. But since the three parties had formed the alliance based on a CMP and just 6 months have passed since it took office (out of which nearly three months have been consumed by the crisis arising out of the pandemic), this is not the time to point fingers or indulge in a slugfest. This is Thackeray's first attempt at heading a government. He needs hand-holding and sage advice. Sharad Pawar is a seasoned administrator. He should guide the Maharashtra government.

The BJP is trying to fish in the choppy waters. It is rumoured that Amit Shah has given his go-ahead to the state unit to topple Thackeray. But the party will be doing a great disservice to the people of Maharashtra if it indulges in brinkmanship and tries to topple the MVA government in the state at this juncture. The state government is fighting the pandemic and it needs all help to prevent the situation from going out of hand. Although it has been found wanting, this is the time to help the state and not topple the government. Politicking can wait until after the war against the pandemic has been won. The MVA government, on its part, has to get its act together fast and do better than getting C-minuses on its report card.