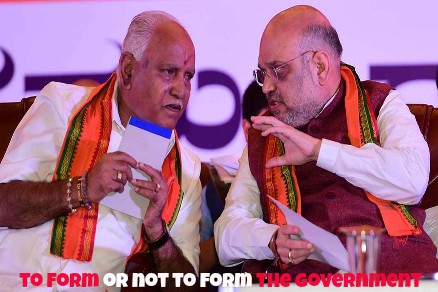 BJP In A Dilemma Over Forming The Government In Karnataka

BJP In A Dilemma Over Forming The Government In Karnataka

The BJP has not yet staked the claim to form a government in Karnataka. Ostensibly, it is because Yeddyurappa is waiting for the 'blessings' of the party's ideological mentor, the RSS. But in reality, the party high command must be weighing in the options. State party leaders are camping in Delhi to gauge the mood of the high command. The grapevine has it that Amit Shah is of the opinion that the party should wait till the Speaker decides the fate of the rebel MLAs. If necessary, the state will be put under President's rule for the time being. But latest reports say that the high command might allow Yeddyurappa to stake the claim tonight. That would be a huge mistake.

The BJP, with 105 MLA's in a house of 224, is clearly in a minority on its own. It cannot take the support of the rebel MLA's and the two independents for granted. Ideally, the party should wait till the fate of the MLA's is decided and bypolls are held. It has to first see who the people elect. Once the bypolls are done and if the BJP gets a majority on its own, only then should it form the government. The embarrassment of seeing the government falling down in a few months must be avoided at any cost, especially since it will also make the people of Karnataka suffer further.

The people of Karnataka have already suffered for the last 14 months as the inherent contradictions in the Congress-JD(S) alliance did not allow it to govern the state properly. A major part of Kumaraswamy's time was spent in managing the contradictions and keeping the alliance going. State Congress leaders, especially Siddaramariah and his supporters, never reconciled themselves into accepting Kumaraswamy as the chief minister. In the end, the alliance collapsed under the weight of its own contradictions.

But any BJP government that does have the numbers will also meet the same fate. For, if plum posts are offered to the turncoats, the party will find it difficult to control the resentment of the state leaders and the rank and file. Already, there are reports that there are more than 70 aspirants for the limited number of ministerial posts. Yeddyurappa will have to use all his experience and political acumen to satisfy all factions. Also, turncoats cannot be relied upon fully. They bring in a new culture and new factions which can disturb the party's structure and equilibrium. Hence, the BJP has to be very careful and must wait until the bypolls to form the next government.