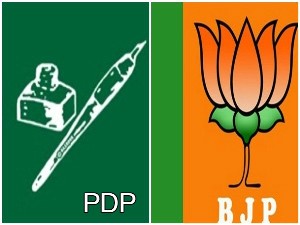 Editor-in-Chief of indiacommentary.com. Current Affairs analyst and political commentator. Writes for a number of publications. View all posts by this Author
As expected, the BJP-PDP marriage of convenience has ended in divorce. It was a hastily cobbled alliance between two disparate partners but it was necessary to provide governance. Maybe, if Mufti Md. Sayeed was alive, he could have made it survive longer. But Mehbooba has different compulsions. Already, she has lost all credibility with the electorate. Now, if the Ramzan ceasefire is not extended, she will lose further face. But the Centre is not in favour of extending the ceasefire. That seems to be the immediate trigger why BJP withdrew support. Further, with 2019 general elections approaching, the BJP feels it will not be able to explain to the electorate why it is in an alliance with a party that is soft on miscreants and wants to talk to anti-India elements.

But whatever the political compulsions, a state cannot be subjected to prolonged Governors rule. It is always better for any state to be ruled by peoples representatives. The last elections had starkly shown the deep divide between Jammu region and the Valley, with PDP winning 28 seats in the valley and BJP 25 in the Jammu region. As of now, if we assume that no party will tie up with the BJP, the possibility of an elected government assuming office exists only if PDP(28), National Conference(15) and Congress(12) all come together. No two parties among the three can combine to cross the halfway mark, even with the help of smaller parties and/or independents. But that seems to be a farfetched option and the state will probably be under Governors rule till the next elections to the assembly.

This is a sorry state of affairs. No state can progress effectively if an elected government does not take up long term plans and implement policies to benefit the people. Under Governors rule, only short-term and ad-hoc plans are taken up and implemented. The focus in mainly on day to day governance and real development takes a backseat. The people of Jammu & Kashmir deserve better. Moreover, Pakistan will step up its support to the miscreants if the Centre rules the state through the Governor. The Centre has to realize that a hardline policy is probably effective only as immediate deterrent and to control the situation if it goes out of hand. But to solve the problems of the state, peoples participation is necessary and it can be achieved only by an elected government that talks to every shade of opinion barring the separatists. Hence, the Centre must not try to run the state by proxy and elections must be held sooner rather than later.