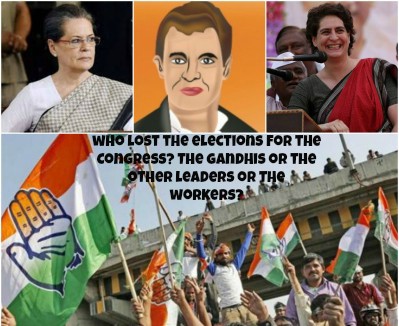 Blame Game Is Not Going To Help The Congress

Blame Game Is Not Going To Help The Congress

It was strange of Priyanka Gandhi to blame non-working Congress workers for her party's abysmal showing in Uttar Pradesh. Her claim that Rae Bareilly was won by Sonia Gandhi with the help of the people of the town is a slap in the face of those Congress workers who worked tirelessly despite having no incentive (the Congress was a lost case in the state from the day it was not made a part of the SP-BSP-RLD mahagathbandhan) and no leaders to inspire them. The way she is going, she will alienate the few remaining workers of the party and reduce it to a footnote in state politics.

The Congress has a long history of sycophants masquerading as political leaders fawning before the Gandhis and insulating them from any blame in case of defeat, failing which the Gandhis themselves attribute the blame on a host of factors. This time, the defeat is so severe against a government that was facing anti-incumbency that both these elements have come into play. First, Rahul Gandhi resigned as Congress president and immediately sparked a rush among spineless Congress leaders to ask him to take it back. Then Rahul said that senior Congress leaders did not help him in his efforts to dislodge Modi. Now, Priyanka is blaming the workers.

The blame game is not going to help the party reinvent itself. Although the odds were against it as after 2014 as the party neither attracted corporate funds nor had a plan to counter the rising influence of the BJP, it could have done well had taken feedback from the grassroots. But the Gandhis live in their ivory tower and have completely lost touch with ground realities. They allow the sycophants to be their eyes and ears and hence they get distorted and biased reports. The party leadership failed to realize that workers were disillusioned.  Mass leaders like Alpesh Thakur who joined the party left it soon.

Then, Rahul Gandhi allowed Narendra Modi to set the agenda and the pace of electioneering. He also chose several wrong lines of attack on Modi and his government. Corruption in the Rafale deal was never accepted by the people as Modiâs image as an incorruptible leader rode above all else. Rahul failed to realize this and kept on making fun of Modi with the slogan chowkidar chor hai. Again, asking for proof of the surgical strikes was another huge blunder as the people believed Modi when he called the entire opposition anti-national for that.

His charge that senior leaders did not support him also falls flat as Rahul positioned himself as the face of the party and headed a grueling campaign by addressing more than 125 rallies all over the country. It is not known which other leaders were assigned campaigning work on this scale and, knowing the Gandhis and their propensity for self-promotion, it is doubtful whether any other leader was chosen to campaign so hard. For instance, when going after Modiâs economic policies, wouldnât it have been better to assign the job to Manmohan Singh and P Chidambaram? Their words would have carried greater weight than a self-indulgent Rahul making tall claims about the economy. But did we see Chidambaram address any rallies in, say, Uttar Pradesh or West Bengal? Was Singh asked to campaign in Bihar or Maharashtra? Even when these leaders were employed in the campaign, the spotlight was totally on Rahul and they were just fillers or persons who speak to keep the crowd occupied before the main speakers turn. Hence, Rahul must take the entire blame for the debacle on his shoulders.

The Congress is not serious about its future and with no Gandhi in the saddle as of now; no other frontline leader is willing to give any other leader the leeway to guide the party. This attitude is clearly reflected in the manner in which most frontline leaders did not attend a meeting called by Jyotiraditya Scindia to take stock of the post-poll situation and analyze the reasons for the crushing defeat in the state of UP. Scindia was in-charge of west-UP while Priyanka Vadra was in-charge of east-UP. But Priyanka felt it was beyond her station to attend the meeting. This sense of entitlement is something that both keeps the Gandhis at the helm of affairs in the Congress (as long as it is populated by fawning sycophants) and brings about their defeat in elections in an India where people are increasingly rejecting political dynasties.