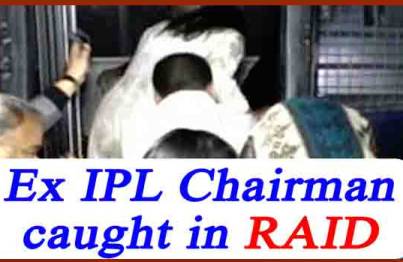 Editor-in-Chief of indiacommentary.com. Current Affairs analyst and political commentator. Writes for a number of publications. View all posts by this Author
pic courtesy: oneindia.com(modified)

Gujarat is a dry state. But liquor is available to those who want, any time and at any place  for a stiff premium, though. Hence, those tipplers who need their daily peg have connections to lay their hand on the contraband stuff. Confirmed reports talk of mobile vending units in which cars with all brands in the boot land up at ones place to sell liquor. Booze parties are not unknown in Ahmedabad, Vadodara, Surat, Rajkot and other upscale towns of the state.

While the well-connected have their fun in the state, the faint-hearted make a trip to Daman, Diu or Mount Abu to party. But Chirayu Amin (ex-FICCI president and ex-IPL chairman) and other rich and famous businessmen of the state must be regretting attending the pre-wedding party of the grand-daughter of industrialist Jitendra Shah in a 35-acre farmhouse on the outskirts of Vadodara.

With the anti-prohibition laws tightened just a few weeks ago, the Gujarat police got cracking on a tip-off and raided the party, arresting 260 people  both men and women  for indulging in something that was prohibited. They let off the guests after collecting blood samples but arrested the host Jitendra Shah and his son Abhay.

It has become a tradition nowadays to host a few cocktail dinners as part of wedding celebrations, even in families who themselves are teetotalers. In places as far apart as Guwahati, Tiruvananthapuram, Amritsar, Nagpur, Jaipur and Vadodara, attendance in ceremonies dips considerably if drinks are not being served. People are shamelessly known to enquire beforehand if the host is serving liquor or has alternate arrangements (most often done in a car in the parking lot). Social drinking has assumed new connotations in India, where people are now considered backward if they do not have a peg or two. Unwilling hosts have to arrange liquor in parties just to ensure relatives and friends put in an appearance and stay for a decent length of time.

But in a state where liquor is prohibited, holding a cocktail party is both against the law and a social crime. It also reinforces the belief that prohibition laws are not meant for the rich who always have it their way. The raid and arrests in Vadodara will go a long way in putting a dampener on such parties in Gujarat. Destination weddings have taken off in a big way in the last few years. Hence, it was stupid of the host Jitendra Shah to risk breaking the law in Vadodara. If at all he wanted his guests to enjoy their drinks, he could have taken them to any destination where it was not a crime. Respect for law must begin with responsible citizens and the rich and famous must take the lead in this matter.