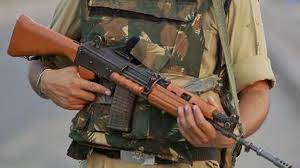 Editor-in-Chief of indiacommentary.com. Current Affairs analyst and political commentator. Writes for a number of publications. View all posts by this Author
The governments decision to cut modern rifles procurement for the infantry division of the Indian army by two-thirds is baffling, to say the least. Although 800000 modern rifles were required to replace the INSAS rifles being used since 1988, funds have now been sanctioned only for 250000 rifles. It is said that the order was pruned to prioritize spending and speed up delivery. Another reason is that out of the 450000 troopers in the infantry, only 250000 go to battle zone while the rest are support soldiers.

But the reality on the ground is different. Infantry troopers bear the brunt of the battle with India engaged in two war-like zones across the eastern and western frontiers. Also, with terrorism in J&K and Maoism in other parts of the country engaging the troops, it is extremely necessary for soldiers to have modern weapons to take on these ultras who are increasingly laced with sophisticated arms.

Once the decision is taken to prune the order, it becomes very difficult to get sanction for further order. Even if the army and the government wanted to speed up the order, the correct procedure should have been to get sanction for all 800000 lakh rifles at one go and order in tranches with a gap of 6 months to a year. For instance, 250000 rifles should have been ordered immediately and say another 200000 for delivery 6 months after the first delivery and the rest after 1 year. That would have speeded up the first delivery and ensured that the rest were kept in the loop. But now, given the bungling ways of the bureaucracy, it is not certain when, if at all, the rest of the rifles will be procured.

Further, even if half of the infantry troopers act as support soldiers, they have to be kept battle ready and be equipped exactly like the others. For, if they are required to go to the battle zone in an emergency, they cannot be expected to carry outdated and phased out INSAS rifles. With the Pakistani and Chinese armies modernizing their infantry, India cannot be caught napping. Indian soldiers need modern weapons to keep the country safe. It is upon the government to cut expenditure elsewhere but provide funds for the armed forces to keep them in battle readiness.