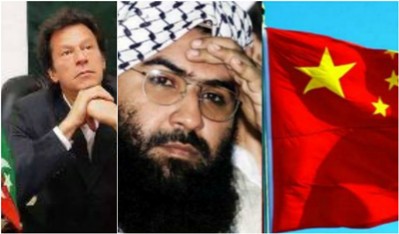 Editor-in-Chief of indiacommentary.com. Current Affairs analyst and political commentator. View all posts by this Author
Finally, China has caved-in under intense Indian and international pressure to drop its objections and remove its technical hold placed on designating Masood Azhar as a global terrorist in the 1267 Committee of the United Nations. The international body has promptly declared Azhar as one. This fulfils a long-standing demand from India and clears the way for two things  one, the freezing of Azhars assets all over the world and restrictions on his movements along with greater international scrutiny on the work of the terror chief and two, perhaps an opening that will provide for greater cooperation between India and China, if not in everything then at least in anti-terror policies.

The glare on Azhar will now force Pakistan to stop treating him with kid gloves and give him the freedom that makes a mockery of all anti-terror laws and the fight against terrorism. It will also make Pakistans position tougher vis-à-vis its declarations before the FATF. With both Jaish-e-Mohammed and Masood Azhar now under an international ban, the Pakistani ploy of shielding Azhar will no longer wash. It will now have to take immediate punitive action (which will have to be more than just eyewash) against Azhar and report the same in detail to the FATF to escape censure and blacklisting. It will now have to contend with increased objections from India in respect of Azhar and his terror outfits and it will no longer be able to brush them aside.

There is no doubt that the Modi government has been relentless in its pursuit of getting Azhar designated as a global terrorist by the 1267 Committee. Once China started putting the issue on technical hold and was not receptive to Indian overtures on the issue, India changed track and went on an overdrive to apprise the international community of the danger of having a terrorist as well entrenched as Masood Azhar to roam free in Pakistan. Its efforts bore fruit in the aftermath of the Pulwama terror attack and the retaliatory surgical strikes India undertook to flush out terror camps inside Pakistan.

The international community, especially France, UK and USA started circulating a petition that would have bypassed the 1267 Committee and would have got Azhar banned directly by the Security Council. This helped as China, fearing isolation, started to seriously look into the Indian allegations against Azhar and removed the hold. This is a big step for India in the fight against cross-border terrorism and for the international community against terrorism as a whole. India should now tighten the screws and ensure that Pakistan takes all steps that are warranted by international law against global terrorists.