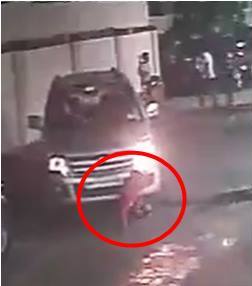 By our team of in-house writers. View all posts by this Author
People are talking about the amazing escape a boy had when a car ran over him in Mumbai. The video, posted by the Bengaluru police and other twitter users has gone viral and has elicited varying responses from people. Some people have angrily demanded that the driver be arrested (she has been arrested subsequently and released on bail) while others have questioned the intelligence of the parents in allowing their children to play on the roads.

As seen in the video, the boy was sitting near the vehicle on the wrong side. The area was in the blind spot of the driver. Hence, she did not realize what was happening and ran over the boy and drove away. Amazingly and miraculously, the boy was dragged for a few metres and then went under the car, only to emerge unscathed. He got up after the car went completely over him, dusted himself and ran over to his friends who were playing a few metres away. If you see the boys reaction it would seem that nothing had happened or as if it was a daily occurrence for him.

Some people commented that probably the high ground clearance of the Maruti Wagon R saved the child. Others called it Gods mercy. But most were of the opinion that it is wrong for children to play in areas where vehicles ply. But people say that with dwindling open spaces, children will play wherever they get the place. Drivers usually keep this in mind when they drive in residential complexes. People say this was a rare happening.