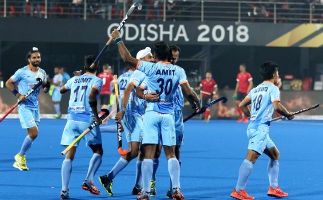 Sudipta is a sports writer based in Bengaluru View all posts by this Author
India entered the quarterfinals of the International Hockey Federation (FIH) World Cup in Odisha on Saturday by routing Canada 5-1 in their final Pool C match at Kalinga Stadium. The result showed that theMen in Blue are getting better after each match. The hosts qualified for the next round as the table toppers of Pool C, even though they were on the level with Belgium at seven points in three matches. India topped the pool on better goal difference of +9 compared to +5 of Belgium.

This comfortable position at the Pool C points table helped India, the fifth-ranked team in FIH world rankings, to advance to the quarterfinals. On the other hand, Belgium suffered heartbreak after starting the tournament as one of the favourites for the coveted title. Now, they will have to play crossover against the third-ranked team of Pool D, which is yet to be decided.

India will now confront either Germany or the Netherlands in the quarterfinals next week. In case, the hosts fail to get better of them in their December 11 clash they will get a second chance when the winner of the match between second and third-ranked teams of Pool C and D will meet them to revitalize their campaign.

Coming back to the India-Canada match, the home team took a lead in the 12th minutes of the first quarter, when Harmanpreet Singh found the back of the net from the top of Canada goal line. However, the North American side fought back and got the much-needed equalizer when Floris Van Son managed to beat Indian custodian PR Sreejesh in the 39th minutes into the second half.

But, things changed completely in the final quarter when a different India hit the pitch breaking the huddle. A flurry of attacks from the right flank left the Canadian defense in tatters. A total of four goals were scored by India in a short span of time to leave Canada gasping. Coach Harendra Singhs decision to bring Lalit Upadhyay back to midfield from the defense, benching captain Manpreet Singh who was less than 100 percent in the match, proved to be a masterstroke.

Although the Indian defence gave a solid performance and did not allow the Canadians any liberties, it was the wasted opportunities close to the Canadian goal that must be worrying coach Harendra Singh. While the front line did an excellent job in penetrating the Canadian defence, they faltered time and again at from close range. Penalty corner conversion is also an area of concern. The big boys of hockey are waiting in the next round. If India has any desire to win the cup, it must up its game in these two areas.