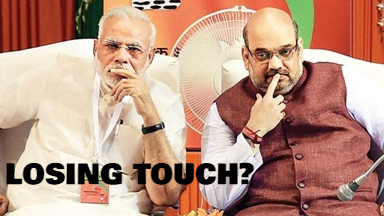 Editor-in-Chief of indiacommentary.com. Current Affairs analyst and political commentator. Writes for a number of publications. View all posts by this Author
The bypoll results have been a huge setback for the NDA, more specifically for the BJP. It has just managed to retain the Palghar LS seat in Maharashtra in a one-to-one fight with ally-turned-foe Shiv Sena. The bad news is that vote share is also falling. The other bad news is that since allies like JD(U) in Bihar are also losing seats, they are blaming the BJP for the reversals. Is anti-incumbency setting in? Is the Modi magic waning? Has the opposition found the right index of unity to beat the BJP?

The loss in Kairana in UP was particularly devastating for the party since it was twice in quick succession that the opposition used a formula to put it across the BJP. It seems Amit Shah has no answer to the coming together of regional forces such as SP, BSP and RLD. The matter was made more difficult because the Jats deserted the party due to the partys indifference to distressed sugarcane farmers. Muslims plus Dalits plus Jats dealt a body blow to the BJP that even consolidation of Hindu votes could not counter and overcome.

In the rest of the country, the Congress won in some places while regional forces such as JMM in Jharkhand, NCP in Maharashtra and RJD in Bihar turned the table on BJP. The writing seems to be on the wall. What the BJP is doing, like revival of the economy as manifested in rising GDP numbers and DBT, may be topics of hot discussion in acadamia. But the common man is not concerned with all this. He sees hatred and intolerance, distressed farmers and jobless youth and his anger reflects in bypoll results. The BJP has a herculean task ahead of it if it wishes to retain power in 2019. It seems that contrary to the partys views, this time Modi and his jumlas might not be enough to breast the tape.