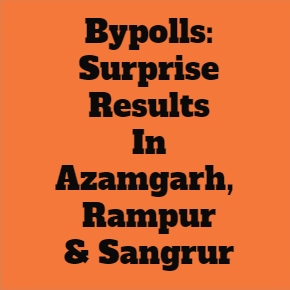 Bypoll Results Show Surprises In UP And Punjab

Bypoll Results Show Surprises In UP And Punjab

The results of the bypolls in three parliamentary constituencies in two states and seven assembly constituencies in four states threw up some surprises while other went as per past experience. In the first surprise results, both Rampur and Azamgarh Lok Sabha seats, considered to be Samajwadi Party (SP) strongholds, went the BJP way this time. In another big surprise, the Aam Aadmi Party (AAP) lost the lone seat it held in the Lok Sabha when its candidate lost the Sangrur seat (held earlier by chief minister Bhagwant Mann) to Simaranjit Singh Mann of Akali Dal (Amritsar). In the assembly bypolls, the BJP retained three seats in Tripura and the Congress won from Agartala, while the YSRCP won in Andhra, the JMM in Jharkhand and AAP in Delhi. The results provided a silver lining to the Congress which won the Agartala seat in Tripura, the first seat it won in the state after 7 years, as it fielded a strong candidate in the popular Sudip Roy Burman who left the BJP to return to the Congress in February 2022. Burman has consistently won in Agartala, earlier as a Congress candidate, then as BJP candidate in 2018 and now again as a Congressman.

For the BJP, the wins in Azamgarh and Rampur were especially good as Akhilesh Yadav and the SP had emerged as a formidable opponent in the state elections held in 2022. Akhilesh Yadav had won from Azamgarh (and Mulayam Singh Yadav before him) and they had retained the seats even when there was a huge wave in BJP's favour in 2014 and 2019. But this time, with weak candidates and effective campaigning by the BJP, the SP ceded ground and the turnaround was huge. Akhilesh Yadav had won by 250000 votes in 2019. Azam Khan had won Rampur with 100000 votes in 2019. To turn such huge margins and historical support for SP in its favour is a huge plus for the BJP. On the other hand, the loss suffered by AAP in Sangrur shows that it does not take much time for the people to turn against any party, also one that it has supported wholeheartedly in the state elections just a few months ago. Equally disturbing is that fact that the controversial Simranjit Singh Mann won from Sangrur. Mann dedicated his win to the separatist leader late Jarnail Singh Bhindranwale.