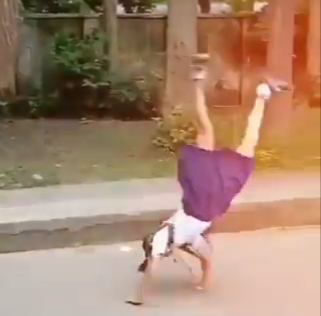 People are talking about the video that showed two children - a girl and a boy - doing perfect cartwheels and somersaults on the road with their backpacks in place. People were amazed at their agility and talent and were wondering where they were located. Various guesses were doing the round in the media with some saying they were from the north-east. But it is now confirmed that the duo were from the Garden Reach area in Kolkata and were trying to impress their dance teacher with their routine. But they ended up impressing none other than Nadia Comaneci, the Romanian gymnast who had made a perfect 10 seem like child's play. Comaneci tweeted "this is awesome" with a short clip of their video and put a stamp of approval by further saying "outstanding....on the way to school".

People say that this is high praise from the high priestess of gymnastics. The children are not gymnasts but they are training to be dancers. They are learning hip-hop and B-boy dance forms for the last four years. Jashika Khan is just 11 and Mohammad Azajuddin is 12. People say the duo is blessed with an amazingly flexible body. They say that if they are trained in gymnastics, they might pick it up fast. Their teacher, Shekhar Rao, picks up children from the area and trains them. He was warned against wasting his time and money over these children but he says that the fame they have now earned is how he wants to answer those who questioned his judgment.

People say that there are a lot of talented children and youngsters in India and there are also those who want to train them.  People are also saying that the power of social media will ensure that these talented youngsters will be discovered and have the opportunity to show their act on a bigger stage.