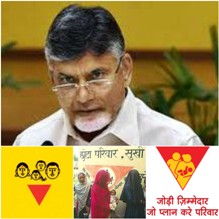 Editor-in-Chief of indiacommentary.com. Current Affairs analyst and political commentator. Writes for a number of publications. View all posts by this Author
It has been reported that Chandrababu Naidu, the boss of the Telugu Desam Party, has exhorted the people of Andhra Pradesh to have more children, even 4 or 5. This is not the first time Naidu has said this. He had made such an appeal a number of times a few years back too. While some MPs are demanding a Population Control Bill to adopt a two-child policy, Naidu wrongly thinks that more is merrier. Naidu should be asked whether it is the quality of the population that matters or its quantity.

It is surprising that a person who is otherwise so forward-looking and a lover of technology (he is credited with having broughtCyberabad to Hyderabad) can have such regressive thoughts. Naidu based his appeal on the alleged fact that the population in Andhra was decreasing as the number of registered births was lower than that of registered deaths. At least one magazine has confirmed that Naidu got his facts wrong.

Naidu raised an alarm saying that population in China, Japan and Europe was decreasing and we should not allow this to happen in India. He said his government will not penalize people for having more than two children. Such thinking was not expected from a seasoned politician like him. Most states have a two-child policy for most employees and it has done wonders for population control. Many welfare schemes are also linked to the two-child policy. Naidu must not tinker with these policies.

India had taken great pains to stabilize its galloping population by unleashing a population control campaign as far back as 1952. The efforts of the volunteers coupled with rising aspirations which made parents realize that having lesser children meant they could bring them up and educate them in a better way has meant that Indians have become conscious that Hum Do, Hamare Do or Chota Parivar, Sukhi Parivar are not just slogans. Figures show that the population of Andhra grew by 10.93% between 2001 and 2011. In addition, the state had a very healthy sex-ratio of 993 females per 1000 males.

Instead of advising people to have more children who they might not be able to bring up properly given their economic condition, Chandrababu Naidu should exhort people to give birth to as many children as they can bring up properly by feeding them and giving them a good education. As chief minister of the state, he must know that population explosion fritters away economic growth. He must also realize that his state (or no state in India, for that matter) is equipped to handle 4 or 5 children per couple.