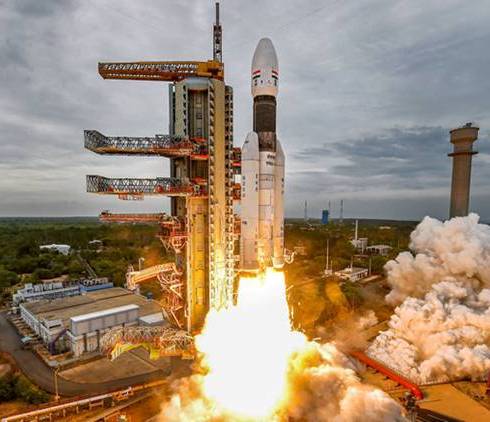 Scientists at ISRO can take a bow for the successful launch of Chandrayaan-2. They are attempting to make a landing at the South Pole of the moon, something that has not been done by any other nation. If successful, it will open a new vista for research on the moon's surface. The take-off (after the aborted attempt a few days ago due to a leakage which was discovered just in time) was smooth and the following maneuvers were performed with ISRO's customary expertise.

The indigenously developed Geosynchronous Satellite Launch Vehicle Mark-III (GSLV Mark-III) is designed to send up satellites weighing up to four tonnes. Launching the orbiter, the lander (Vikram) and the rover (Pragyan) of the Chandrayaan-2 mission, which together weigh 3.87 tonnes, on the first operational flight of GSLV Mark-III is in itself an achievement. It shows the confidence the scientists had in both the satellite and the mission.

Chandrayaan-2 mission will attempt many firsts. While the Moon Impact Probe, along with Moon Mineralogy Mapper of NASA, on Chandrayaan-1, had first indicated the presence of water on the moon, the imaging infrared spectrometer instrument placed on the orbiter of Chandrayaan-2 will allow ISRO to look for the presence of water more precisely. The vertical temperature gradient and thermal conductivity of the lunar surface and lunar seismicity will be studied for the first time.

Chandrayaan-2 will allow ISRO scientists to test technologies for deep-space missions in the future. They had already developed the rover Pragyan indigenously after the Russian firm that was to make the same failed to deliver it. The technology required to make a soft landing, using retro-rockets and applying brakes on the rover, will be tested. Finally, it will be tested if the rover is able to take-off again after completing its mission. This technology is essential for manned missions, which would be attempted in the future. ISRO has taken a giant leap and the successful achievement of the mission's goals will further confirm India's tag of being a space superpower.