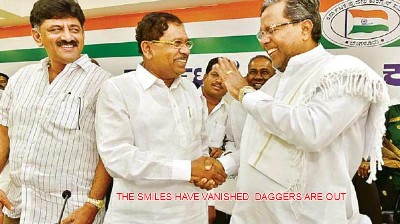 Congress In Karnataka: Capitulation And Dissidence

Congress In Karnataka: Capitulation And Dissidence

Editor-in-Chief of indiacommentary.com. Current Affairs analyst and political commentator. Writes for a number of publications. View all posts by this Author
The Karnataka Congress is being torn apart in the shadow boxing between deputy chief minister G Parameshwara, former chief minister Siddaramaiah and key troubleshooter DK Shivakumar. After the party capitulated totally to handover all key portfolios like finance, excise and transport to the JD(S), its lawmakers were left fuming. Rahul Gandhi pacified Shivakumar, who expected deputy chief ministership as just reward for keeping the flock together in the face of BJPs efforts to snare MLAs, with two portfolios instead. But Siddaramaiah is fuming at being sidelined after running a relatively successful campaign that prevented a BJP government. On top of this, Parameshwara is gloating at having won the prized spot as deputy chief minister.

This simmering cauldron has made the party announce an R & R  rotate and replace  programme where its ministers will have an initial term of two years, subject to six-monthly performance assessment. If they do not pass the assessment test, they can be removed earlier. This gives hopes to those who are left out in the first cabinet. But the MLAs are not buying this for the simple reason that this same assessment procedure was to be followed in the last government run by Siddaramaiah. It never was. The MLAs know that it will not be followed this time too and only those close to G Parameshwara will get the berths.

There is no love lost between Parameshwara and Siddaramaiah. While the latter is keeping himself busy in hometown Badami and trying to give an impression that he is not pulling the strings, the fact is that since he was responsible for getting most of his men a ticket and they make the majority of Congress MLAs, he has a very strong hand in the dissidence. It is not yet clear whether Shivakumar has joined hands with Sidda, but if he does, Parameshwara will see his clout diminish, even if the high command supports him. The mystery will continue till Siddaramaiah plays his hand.