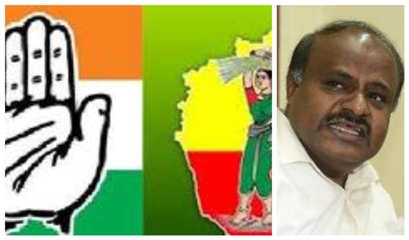 Congress-JD(S) Will Always Have To Be On Guard

Congress-JD(S) Will Always Have To Be On Guard

Editor-in-Chief of indiacommentary.com. Current Affairs analyst and political commentator. Writes for a number of publications. View all posts by this Author
The Congress-JD(S) combine in Karnataka has won the first and most important round by keeping its flock together and forcing BS Yeddyurappa to resign without facing the floor test. It was not a small victory given the fact that the BJP employed all its might including inducements, coercion and threats to snare the MLAs. But for once, both the JD(S) and the Congress displayed immense management skills to ensure that not even one MLA crossed over.

Having cleared the first hurdle, the combine has quickly got down to business. With the Congress having already declared unconditional support to the JD(S) with HD Kumaraswamy as chief minister for the full term, the matter is now only of cabinet formation. It seems that there will be a deputy CM from the Congress with 20 ministries going to the Congress and 13, including important ones such as finance and PWD, to the JD(S). The only hiccup is the demand by Lingayat MLAs (16 of them from the Congress and 4 from JD(S)) that there should be a Lingayat deputy CM. One is sure that after the BJP onslaught was successfully tackled, this demand will not cause much concern.

But the alliance will have to perpetually be on guard against poaching from the BJP. Smarting under the defeat, the next best alternative for the BJP will be to try and break the alliance. If the BJP manages to win the two seats where elections were deferred, its tally will rise to 106. If the two independents also support it, it will further rise to 108. Then the count will stand at 108:116 and the BJP will need to snare just 9 MLAs to reduce the strength of the house by making them resign. Then in a house of 215, it will have 108 to the alliances 107. This situation can arise in the future as the BJP is not going to sit idle. Then there is the Siddaramaiah angle too. The way he has been sidelined, a rebellion cannot be ruled out. In that case, the Congress will lose more than 15 to 20 MLAs. The combine has to guard against all these eventualities and walk a very tight rope while ruling the state.