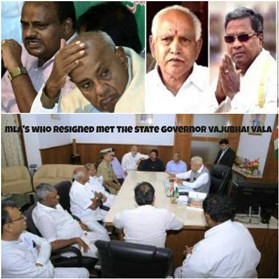 Congress To Blame For Crisis In Karnataka Alliance

Congress To Blame For Crisis In Karnataka Alliance

With the resignation of 11 MLAs, the Congress-JD(S) government is facing a fresh crisis. This time, however, the numbers, combined with two Congress MLAs who had resigned some days ago, threaten to topple the government. More seriously, as the Congress has continuously chosen to brush the discontent in the party under the carpet, senior leaders like Ramalinga Reddy (a name to reckon with in Bangalore) and H Viswanath have been forced to put in their papers. Some of the resigning MLAs have indicated that they want former CM Siddaramaiah back in the hot seat.

It is surprising that instead of acknowledging the crisis, people like DK Sivakumar and KM Narayanswamy have sought to underplay the issue. Sivakumar first said that nobody had resigned but later said that those who have wished to resign have small grievances and the party will address them to bring them back in the fold. Narayanswamy, on the other hand, chose to blame the media for blowing up the issue as according to him only 4 or 5 MLAs had resigned.

A clue that a break-up in the alliance was imminent was available when former PM and JD(S) patriarch HD Deve Gowda had recently said that mid-term polls were inevitable. That he chose to retract his statement under pressure from the Congress did nothing to quell the buzz. Deve Gowda is too seasoned a politician to indulge in loose talk. He must have sensed the mood in the Congress camp where several MLAs, instigated by Siddaramaiah, were bent on breaking the alliance. His reading of the matter was correct and the Congress has indeed broken up.

The fault lies with the Congress. It has kept its eyes and ears closed even as a large number of its MLAs have resented giving the top seat permanently to the JD(S) which won just 37 seats. Some state Congress leaders, especially Siddaramaiah and his supporters, have spent all their time trying to undermine HD Kumaraswamy and the very government they are a part of. The Congress should have renegotiated the terms of the alliance with the JD(S) to seek rotation of the top job and better representation for its MLAs as per its status of the party with more than double the seats. By not doing so, it has allowed the discontent to fester and the BJP an opportunity to stake the claim to form the government.