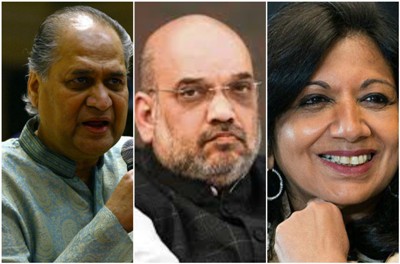 Corporate India Turns On The Heat: Not All Who Criticize Are "Anti-Nationals"

Corporate India Turns On The Heat: Not All Who Criticize Are "Anti-Nationals"

The Modi government, which was called "suit-boot ki sarkar" by Congress leader Rahul Gandhi in its first term for its alleged proximity to industrialists, has now been accused of keeping them at arms' length. Kiran Mazumder Shaw, the CMD of Biocon, tweeted that "India Inc. is a pariah and the government dislikes criticism". She also questioned why any criticism of the government was viewed as "anti-national" or even "anti-government".

Mazumder's outburst comes at a time when the government is still gasping for breath after veteran industrialist Rahul Bajaj's stinging criticism on Saturday. Bajaj told Home Minister, BJP president and the de facto number two in the government after PM Modi on his face that industrialists were afraid to speak out as the government took criticism on the chin. He said that a clean environment has to be created where people were not afraid to speak out against the government. Bajaj bluntly told Shah that "we don't have the confidence that if we criticize you, it will be appreciated." Apart from that, Bajaj also spoke about RSS chief Mohan Bhagwat's remarks on lynchings, Pragya's remark on Godse, and the continued incarceration of former finance minister P Chidambaram.

Amit Shah, though taken aback by the stinging criticism from such a luminary, was very diplomatic in his answer. He said, "About fear, I only say that no one needs to fear. Papers have written a lot about Narendra Modi, people are still writing. We have been the most written against but still, as you are saying, an atmosphere has been created, we too will have to make an effort to improve it, but I want to say that no one needs to be afraid. People do speak, on affidavit and in Parliament. Nor does anyone want to scare." He also said that "nor have we done anything whose criticism the government needs to worry about. The government has been run most transparently, we are not afraid of any opposition and if anyone criticizes, then going by its merits, we will try to improve."

Although Shah was diplomatic, the same cannot be said for other Union ministers and the army of trolls who support the Modi government and are derisively dismissed as bhakts by a section of the media. The trolls were their usual abusive selves and tried to discredit Bajaj, something which is not really possible given his track record.  Nirmala Sitharaman, while being otherwise diplomatic, couldn't resist the temptation of raising "national interest" while saying that people were spreading one's own impressions. Hardeep Puri ranted against fake narratives. This again proved what Bajaj had said. This government is not open to criticism and considers anything spoken against it as being against national interest. If two ministers in the government consider what Bajaj said to be his own impression and compare it to fake narratives, it proves beyond doubt that it keeps its head buried in the sand like an ostrich. But the bird does it when it is scared. If, as Amit Shah said, the government is not afraid of any opposition, then why this complete intolerance of criticism? Is everyone else apart from the government, the party, the RSS and those who support them anti-national?