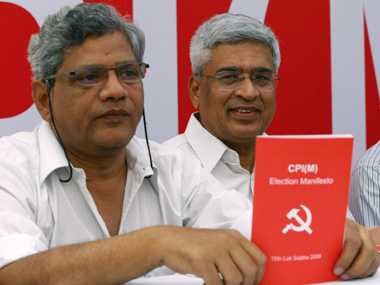 Yogendra is undecided whether he wants to be a writer. So he writes to see if he can be a writer. Ha Ha View all posts by this Author
Generally, when things are not going good for a group of people like a political party, it is expected that party members close rank, brainstorm and devise policies to counter the downslide. But the CPM is different. In its Central Committee meeting recently, the party has decided to have no truck with the Congress ahead of the general elections in 2019. This shows that the party is not serious about two things  one, getting out of political insignificance it has brought upon itself through outdated policies which saw it lose power after 37 long years to TMC in Bengal and which further sees it losing the main opposition spot to the BJP in the same state. It has also been yielding ground in Tripura despite Manik Sarkar being one of the cleanest politicians in India. Two, it is effectively abandoning the quest for a Mahagathbandhan in 2019, as despite its growing irrelevance in Indian politics, the top CPM leaders were often seen as binding forces that brought together diverse politicians like Lalu Prasad, Mulayam Singh and others on the same platform. Analysts feel that this decision of the CPM will work in Narendra Modis favour as it will divide the opposition vote.

But if one were to analyze things deeply, it does not matter anymore whether the CPM is a part of the anti-Modi front in 2019  if the opposition parties can cobble one together. For, the party has totally lost its connect with the people. Apart from nuisance value of calling strikes in banks and other government organizations, the CPM has no relevance in Indian politics today and this will keep going down as years go by. As the tussle between Sitaram Yechury and Prakash Karat in the central committee meeting showed, egos and outdated policies will continue to rule in the organization, taking it further away from the people. As labour laws change and workers do not remain chained to one ideology, the CPM will see dwindling membership and the red flag will no longer be a nuisance only for industrialists and employers. Even the working class will come to mistrust it.