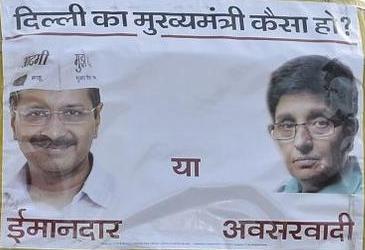 Editor-in-Chief of indiacommentary.com. Current Affairs analyst and political commentator. Writes for a number of publications. View all posts by this Author
The BJP has decided that it will ask Arvind Kejriwal and Aam Aadmi Party 5 questions daily as part of its campaign in Delhi elections. This, it seems, is in response to KejriwalÃÂ¢Ã¢âÂ¬Ã¢"Â¢s repeated calls for televised debate with Kiran Bedi. Each party is entitled to its own devices. While Kejriwal is comfortable scoring points in a debate, the BJP thinks it will be better off asking questions. As Kiran Bedi will not get into a debate with Kejriwal and he in turn will not answer the questions lobbed at him, the people of Delhi will lose out on getting to know who stands for what.

Not that it matters all that much. Indian elections were never about debates between candidates. They are more about unverified and almost defamatory charges leveled against political opponents. As long as the penalty imposed by the Election Commission for such transgressions remains light (barring someone from campaigning etc.) these charges will continue to be thrown about, if not by big-wigs then certainly by hand-picked henchmen.

The BJP wanted to rattle AAP by bringing in Kiran Bedi as its chief ministerial candidate. Although it has managed to do so in so much as AAP is now concentrating all its firepower on Bedi and has almost forgotten PM Modi, the move has also backfired because it has brought the partyÃÂ¢Ã¢âÂ¬Ã¢"Â¢s ratings down. While opinion polls before Bedi entered the fray were predicting a majority for the BJP, post Bedi they are giving AAP an equal number of seats. What is worse is that Kejriwal still remains the first choice of the people for the CMÃÂ¢Ã¢âÂ¬Ã¢"Â¢s chair.

Although there are still a few days left for polling day and Modi is scheduled to address rallies in different parts of Delhi in the interim, it seems that it will be an uphill task for the party to recover lost ground. It remains to be seen if Narendra Modi is able to convince the people of Delhi (as he did during the Lok Sabha elections when the BJP won all 7 seats in the capital) in his rallies in the beginning of February. If his magic has waned then it will be back to square one with a hung assembly in Delhi.