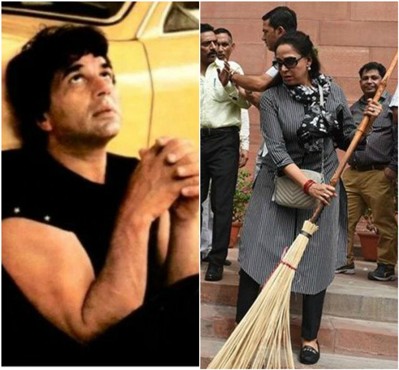 People are talking about how actor Dharmendra candidly admitted on Twitter that his MP wife Hema Malini looked like an "anari" while trying to sweep the forecourt of Parliament as part of the photo-op for Swacch Bharat Abhiyan. People were bowled over by his candour when he admitted that he was quite adept at the cleanliness routine as he used to help his mother during childhood.

People say Dharmendra is an honest and frank person who does not shy away from calling a spade a spade. People say that when his son Sunny got the ticket to fight the elections from Gurdaspur in Punjab, the actor was quick to admit in public that his son could not debate and was not an ideal candidate. People say that it is a rare quality in the world today.

People are also amused that Dharmendra thought it fit to apologize for his anari tweet. This, they say, shows the power a wife wields. In a tweet, Dharmendra has done "tauba tauba" and promised not to do it again, wondering how his jharu tweet could get so much attention. People say both the tweets have made Dharmendra the current darling of social media.