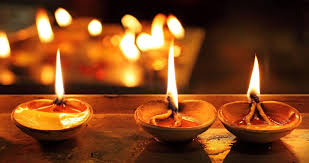 Don't Be Alarmed, Light Diyas If You Wish To Show Solidarity

Don't Be Alarmed, Light Diyas If You Wish To Show Solidarity

A simple request by the Prime Minister to fellow citizens to show solidarity in the fight against COVID-19 by lighting diyas and candles or flashing torches or mobile flashlights from the windows, balconies or gates of their homes on April 5 at 9 pm for 9 minutes has instigated some people to adopt extreme postures and spread alarmist messages or just plain rumours, obviously designed to derail the initiative.

The opposition parties, alarmed by the success of the "junta curfew" and the clapping-and-ringing-bells initiative to salute those at the forefront of the fight against COVID-19 by Modi earlier, have made fun of the Prime Minister's request by alluding that his government is not doing enough to address the real issues and he is trying to divert attention by resorting to such gimmicks. This is just a tactic to undermine the government's efforts in combating the pandemic. The two things cannot be combined. The government is taking appropriate and timely decisions to fight against COVID-19. This initiative is just to involve the citizens.

On the other hand, busybodies have raised concerns that the sudden drop in demand might derail the power grid, leading to blackouts in the country. No data has been provided by those who are spreading such alarming messages. But other experts have estimated the total reduction in demand to be around 12-13 GW. It is not clear how they have arrived at this figure because there is a lot of confusion going around.

Others have started floating rumours that switching off lights means switching off all appliances, like air conditioners, computers etc., too.  This is stupid. Nowhere in his message did Modi say anything about switching off everything at home. He just asked people to create darkness (symbolically representing coronavirus) and then light diyas and candles to show that the nation was one in fighting against it. The government has come out with a clarification that only lights need to be switched off at homes.

The government has also clarified that since only lights at homes would be switched off (all street lights and those at essential facilities like hospitals, police stations etc. will remain switched on), the demand will not fall drastically. In any case, the power ministry assured the nation that it was working on a war-footing to ensure that the grid worked properly.

Hence, people should not be alarmed and if they wish to participate in the initiative, they should switch off their lights only. Remember, the government has also advised that one should not use alcohol-based sanitizers on hands before lighting the diyas or candles. Also, make this a family initiative and do not gather in compounds or on the streets. Follow social distancing norms, as advised by the Prime Minister.