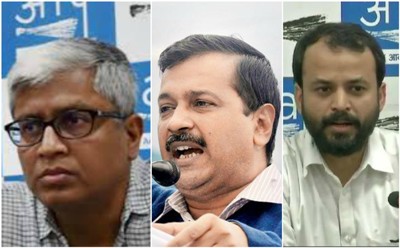 There has to be everything wrong with his style of functioning for so many of his close associates to turn against him. Burning ambition, megalomania and self-promotion  the very three things he often accuses PM Modi of  have made Arvind Kejriwal a leader without followers. He might turn back and say that as long as the people of Delhi support him, he doesnt need these deserters. But politics is not run that way. AAP was founded with a desire to change Indian politics. The foundation for the same was to be laid by bringing together good people on its platform. But when these good people start leaving one by one, it is clear that instead of AAP being a vehicle of change in Indian politics, the party itself has changed into being a bad copy of all other parties.

When Ashutosh submitted his resignation, Kejriwal tweeted that he will not accept it  not in this lifetime. But does it really matter whether Kejriwal accepts the resignation or not? When a person like Ashutosh  who never failed to sing Kejriwals paeans  resigns, it means that matters have deteriorated to the point of no return. Even if his resignation is not accepted, Ashutosh has ceased to be on the same page as Kejriwal and it is clear he will not work for the party.

Hence, instead of fighting the Lieutenant Governor of Delhi or blaming all ills on the Centre or not looking beyond his nose, Kejriwal will be well advised to first set his house in order. He should leave megalomania behind and indulge in some sabka saath sabka vikas in his own party. He should remember the ideals on which AAP was formed and respect the opinions of his associates. He should allow inner party democracy and ask for voting before implementing decisions. Right now, whatever Kejriwal says is lohe ki lakeer in AAP. That is the main reason why the party is disintegrating. It is obvious that when good and professional people from other walks of life leave, their places are taken by career politicians. We all know that career politicians are dependent on money and muscle power  two things that AAP had said it will avoid like plague. So what difference remains between AAP and other political parties? Clearly, AAP has lost its USP and is likely to lose Delhi next.