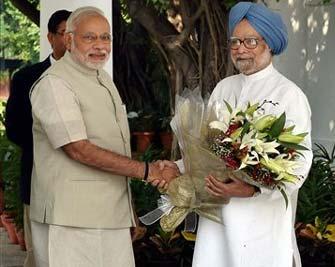 Holding an extreme view and carting the ball out of the park is what interests him most. He is a hard hitter at all times. Fasten your seatbelts and read. View all posts by this Author
India must be one of the few countries where politicians have the right to abuse, question, lampoon, attribute ulterior motives to and otherwise insult a sitting prime minister. But when the same prime minister retorts to a remark made by an ex-PM on his policy, he is accused of being indecent and insulting.

Former prime minister Manmohan Singh had merrily called Modis demonetization move organized loot and organized plunder. At that time, some people called it a very incisive analysis of demonetization given Singhs credentials. But when Modi chose to show him the mirror by saying that Dr Singh must be the only person who knew the art of having a bath while wearing a raincoat, the same people chose to attack Modi by saying he was being indecent in attacking a former PM. One is not aware if anything can be more convoluted than this.

How is attacking a sitting PM in the vilest of language justified and how attacking a former PM not?

If Dr Singh felt that demonetization was loot and plunder, Modi just showed how Singh allowed loot and plunder of nations resources by the Congress party and remained clean himself. Hence, he used the bath-raincoat combination to make his point. Was it coarse or demeaning? Was it designed to abuse Dr Singh? No. It just told the nation that even as the loot and plunder happened during UPA I & II, Dr Singh wore a raincoat to protect himself from getting wet (letting the stigma attach to him). It was a perfectly valid defence by a sitting prime minister for criticism of his policy in strong terms by an ex-PM. Just because Dr Singh has a doctorate does not make him the epitome of decency. He is known to say what Sonia tells him to. If he kept quiet after Modis barb, people called him decent. But does he really have a defence for the way he allowed people to loot and plunder the nation during his terms? His so-called decency stems from the fact that if he defends them, he might get entangled in the mess. He is more worried about protecting his clean image than indulging in a slanging match.

Even otherwise, the fault of the one who facilitates loot and plunder is more than those who actually do the dirty work. By keeping quiet when the nation was being stripped of its resources by the unholy nexus of politicians, bureaucrats and businessmen, Dr Singh failed to follow the rajdharma. He never exercised his authority and kept doing Madams bidding. In fact, many say he did not have any real authority, with all decisions being taken by the extra-constitutional authority in the form of Sonia Gandhi. By keeping quiet then, Dr Singh has lost all moral authority to speak now. No loot or plunder can ever match what was done under his stewardship.