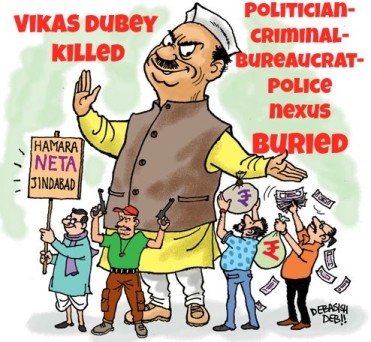 Vikas Dubey first gained notoriety in 2001 when he was alleged to have chased Santosh Shukla, a minister of state in the then BJP government of Rajnath Singh, and shot him point-blank inside the Shivli police station in the Kanpur Dehat area. At that time, since the BJP was ruling the state and he had killed a leader of the ruling party, it is obvious that he was not in their pay. Either he was working to set up his nefarious empire and was eliminating those who were causing hurdles or he was working for any of the other parties. Whatever be the reason, surprisingly, the trigger happy UP police did not eliminate him then.

Since then, the Bahujan Samaj Party (BSP) and the Samajwadi Party (SP) have ruled the state alternately. Mayawati was chief minister from 2002 to 2003. Then Mulayam Singh Yadav took over in 2003-2007. Mayawati again helmed the state from 2007 to 2012 after which it was the turn of Akhilesh Yadav from 2012 to 2017. Dubey had surrendered in 2002 in the Santosh Shukla murder case but was surprisingly acquitted during the SP rule in 2006. He killed Shukla inside a police station and there must have been many witnesses, yet the prosecution could not get him convicted. The BSP and the SP are more responsible for his growth as a dreaded criminal from 2002 to 2017. In these 15 years, the small-time crook had become one of the most dreaded dons in the state.

Yet, ever since the BJP came to power in 2017 and Yogi Adityanath gave a carte blanche to the already trigger happy UP police to go after criminals, a good number of them were eliminated. Strangely, although Dubey was not a BJP man, he continued to thrive. What does this mean? Did Dubey change political colours in 2017? Was the ruling party instrumental in giving him protection for the last three years? If so, what changed now and why did the administration allow the police to raid his house in Bikru and capture him?

The answers to all these questions will never be known with the death of Vikas Dubey. The manner of his arrest, his transfer to UP, the accident and the killing, all look staged. Eyewitnesses in Ujjain confirmed that Dubey surrendered while the MP police claimed to have arrested him. The UP police showed a great deal of urgency in taking him to UP. He was not handcuffed in the car. There are reports that he was shifted to a different car just before the accident happened and the press cars following the convoy carrying Dubey were stopped before the accident site. All these things point to a big conspiracy and the UP government must come clean instead of gloating over eliminating a hardened criminal. For, it has done a great disservice to the country by forever burying the nexus that helped Dubey and will now continue to help other criminals, with greater impunity.

picture courtesy: additions made by us to the original picture by debasish deb appearing in iastoppers.com.