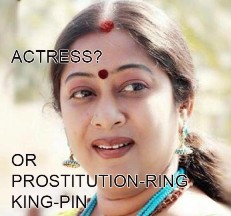 Yogendra is undecided whether he wants to be a writer. So he writes to see if he can be a writer. Ha Ha View all posts by this Author
The glamour industry, mainly the film industry, is a thriving place for the sex business. Young boys and girls are lured by promises of leading, or even bit, roles and trapped into being sex slaves. In worst cases, they are even thrown into the prostitution business. The arrest of Tamil actress Sangeetha Balan for allegedly running a prostitution racket out of a posh resort near Chennai has shown that even successful people cant resist the lure of easy money. Since girls from outside Tamil Nadu were also rescued from the resort, it is obvious that the racket was being conducted on a scale large enough to have scouts recruit girls from different parts of the country.

But what was surprising was the involvement of Sangeetha. She is very popular actress, both in films and on television. There does not seem to be any financial need for her to get into such illegal business. But the lure of easy money and maybe the influence of her partner Satish, who has also been arrested, led her to take this damaging decision which is likely to end her acting career. The film industry chambers, active at other times, do nothing to warn unsuspecting young adults to get into the industry through official channels and not through touts and agents who exploit them.

Without accreditation from industry bodies, anyone can become a talent scout and roam the country to promise young girls and boys roles in films and television serials and then trap them into the sex business. Since the film industry is otherwise well organized, the time has come for it to issue official status to persons wanting to recruit youngsters for roles by giving them accreditation. It will make these touts responsible for their actions. It should also advertize this fact, possibly as a message at the beginning of every movie. It will prevent young people from falling into the trap of imposters.