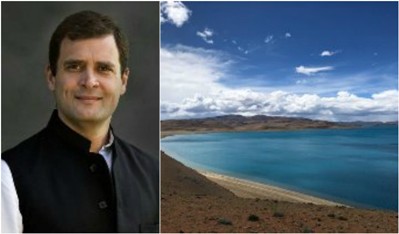 Eat Your Words Trolls, Rahul Is At Mansarovar

Eat Your Words Trolls, Rahul Is At Mansarovar

Yogendra is undecided whether he wants to be a writer. So he writes to see if he can be a writer. Ha Ha View all posts by this Author
A huge number of people seem to hate Rahul Gandhi. The majority of them are right wingers and most of them can be classified as the so-called Modi bhakts. It is a different matter to disagree politically with someone or not be in agreement with his or her ideas. But when this disagreement turns into hate which in turn leads to abuse, it becomes a matter of concern. Those doubting whether Rahul Gandhi has actually gone to Mansarovar or is tweeting pictures taken from the internet have interspersed hate and abuse with their doubting messages. This kind of trolling is worse than fake news.

It has been confirmed that Rahul is indeed in Mansarovar to seek the blessings of Lord Shiva. He is blessed and privileged to have made the yatra which most Hindus dream of but few have the urge or wherewithal to actually undertake. The netizens who doubted it could have indulged in some research to find the truth. Pictures from tourist or religious places can look deceptively similar but as an article on FACT CHECK on the website of The Times of India shows, Rahuls pictures are original and unique when examined closely.

Do not agree with the man, counter his ideas or do not vote for him. But do not belittle him or abuse him. In trying to make fun of him, people are actually lowering their own dignity and showing the world what kind of vile people they are. But do they care as long as they hide behind the shield of anonymity offered by the social media?