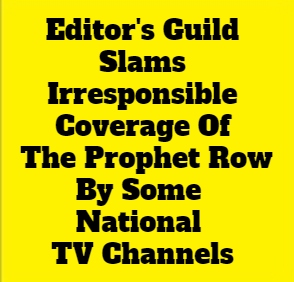 The Editor's Guild is rightly concerned about the role of some news channels in fanning the controversy over the erstwhile BJP spokesperson Nupur Sharma's derogatory remarks about Prophet Muhammad. It has asked these channels to "pause and take a critical look" as to what damage their coverage of the episode, which did not adhere to journalistic ethics, has done. The Guild said that it was "disturbed by the irresponsible conduct of some national news channels for deliberately creating circumstances that target vulnerable communities by spewing hatred towards them and their beliefs." There is no doubt that some national news channels (some regional news channels are even worse) throw caution, journalistic ethics and guidelines by the Press Council of India to the winds when covering controversial events. The Guild was of the view that some channels were guided by "the desire to increase viewership and profit" and said that "the incident that caused unnecessary embarrassment to the country could have been avoided if some of the TV outlets had been mindful of the nation's constitutional commitment to secularism, as well as the journalistic ethics and guidelines that the Press Council of India has issued to handle a volatile communal situation."

Some national news channels have made it a habit to be irresponsible and follow unethical journalism. Their debates are often one-sided and some panelists who are invited to display a 'commitment' to fairness are often 'shouted' down, not allowed to have a proper say or even not allowed to speak at all. The way the debate will be conducted (scripted?) is decided beforehand and it is maintained with an iron hand by the anchor who steers the 'debate' accordingly.

It is painful to watch such a charade but when it descends into something that causes embarrassment to the nation, action must be taken. The right to freedom of speech is freedom to air one's view without fear or favour but it must always be without the right to abuse others. A debate, by its very definition must be formal and civil. Sadly, none of these so-called debates on some of the national news channels are actually so. They are more in the nature of slanging matches which fails to make public discourse richer. Instead, they divide the society by, as the Guild said, making the gap between communities "unbridgeable" as they give "legitimacy to divisive and toxic voices."